Never in a million years would we have guessed this.

Detective James 'Jimmy' McNulty was played by British actor Dominic West for The Wire's run from 2002 to 2008, and the show landed West with two Golden Globe nominations and a permanent place in TV history for being a part of one of the greatest and most-loved shows ever made.

However, the show's creators initially had someone very different in mind. 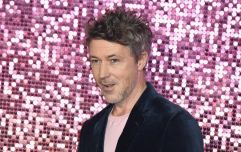 END_OF_DOCUMENT_TOKEN_TO_BE_REPLACED

In a new book, All The Pieces Matter: The Inside Story of The Wire by Jonathan Abrams, the author has compiled an oral history of how the show came together, and in a segment of the book on the initial casting process (the snippet was published by GQ), creator David Simon talks about his first choice for the role:

I thought John C. Reilly could be a different McNulty, certainly not the same, but I thought he could carry all of the excesses and vices of McNulty in a different way. I've loved his work in a lot of stuff. I was on the phone with him. It was three weeks before Halloween [2001], because I was in a corn maze with my kid, Ethan, who would have been like seven, six."

"So, I'm trying to keep up with my kid, who's running around like a madman in this maze, and that's when John C. Reilly called me back. I really couldn't take the call. I talked to him for maybe five minutes, and I said, "Hey, listen, can I call you back? I'm in a corn maze with my kid." And he said, "Yeah, yeah. Call me back." In the time between when he called me and when I called him back, he stopped taking calls. He later told Dom [West, who got the role] that his wife was like, "We are not moving to Baltimore."

However, back at the turn of the millennium, Reilly was getting Oscar-nominations and critical love for his serious turns in the likes of Chicago and Magnolia, so maybe fifteen years ago, it doesn't seem all THAT weird.

There but for the grace of God...

House of Rugby Ireland · Ireland's feel-good win, Casey's initiation song, scrapping Sexton and Scott Williams interview
popular
Eoghan McDermott to leave RTÉ after six years (Report)
€17,500 worth of cocaine found at street party in Limerick
Sony are giving away a free game to all PS4 and PS5 owners
WATCH: Michael B. Jordan leads Jack Ryan spin-off Without Remorse
One man has been charged following Limerick street party, 50 FPNs issued
NUIG students told to write 2,000 word essay for breaching Covid rules
Robbie Williams to be played by CGI monkey in biopic based on his life
You may also like
10 months ago
QUIZ: We give you the theme song, you tell us the TV show
2 years ago
Idris Elba explains his "problem" with Stringer Bell in The Wire
2 years ago
How one scene in The Wire became the greatest and most heartbreaking piece of TV
2 years ago
Bunk from The Wire says that Pope Francis needs to call for the prosecution of criminal priests
2 years ago
15 TV shows that lasted much longer than they really should have
2 years ago
James McAvoy teams up with one of The Wire's best actors for His Dark Materials TV show
Next Page