With the weather so bad, this is perfect to binge on.

Remember when the Beast form the East struck and we were all scouring the Netflix library for some new titles to get stuck into?

Well, here's hoping that Storm Callum doesn't see the nation endure the same levels of cabin fever that we experienced a few months ago, but if you're cosying up to some TV over the weekend, Netflix has you sorted. 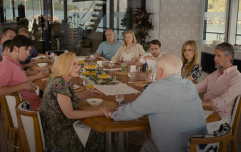 END_OF_DOCUMENT_TOKEN_TO_BE_REPLACED

As mentioned previously, there's an assortment of great titles like Paul Greengrass' (Captain Phillips, the Bourne films) new drama July 22, Gareth Evans (The Raid) taking on the occult in the bonkers Apostle, and a new documentary on the shooting of Bob Marley to get stuck into.

Aside from this, Tinker Tailor Soldier Spy, The Girl on the Train, Babe, and Big Mouth have all been recently added to their library.

This being said, one title has been drawing more buzz than most and if you're a fan of horror, The Haunting of Hill House could be just the thing you're looking for.

As stated in our review, Mike Flanagan's ten-part series is a very different beast to the more standard fare of blood, guts and gore that we're familiar with.

Due to the fact that the show is given time to breathe and develop, the creators are far more interested in fleshing out the backstory and individual arcs.

Okay, what's it about?

END_OF_DOCUMENT_TOKEN_TO_BE_REPLACED

The Haunting of Hill House is a modern reimagining of Shirley Jackson's beloved novel of the same name, about five siblings who grew up in the most famous haunted house.

Now adults, they're reunited by the suicide of their youngest sister, which forces them to finally confront the ghosts of their own pasts - some which lurk in their minds - and some which may really be lurking in the shadows of the iconic Hill House.

While the show excels in terms of drama, there's plenty for horror fans to enjoy as a foreboding sense of dread and menace fills Hill House.

Just like The Conjuring, Flanagan brings a modern feel to some old fashioned scares and some of the ghosts and demons created are extremely eery.

We're not going to give too much away but the public's initial reactions are in and people love what they've seen.

THE HAUNTING OF HILL HOUSE, which I'll agree w/ @tommphilip is the first truly great horror show of all time. It doesn't quite stick the landing, but it's a terrific, emotional show that's impressive for so many reasons

Hot damn. First episode of @flanaganfilm's THE HAUNTING OF HILL HOUSE is fucking aces. Beautiful blend of character, terror, and story setup forcing me to press on into episode two. #Netflix

If you're not watching The Haunting of Hill House.... you're probably right not to. It's fucking terrifying. #TheHauntingOfHillHouse

Watching this show on #Netflix. It's called The Haunting Of Hill House. I'm about 6 episodes in and I'm hooked. This series is already scarier than any horror movie I've seen since the first Conjuring.

As for the critics, the show currently has a rating of 81% on Metacritic and it has clearly made an impression on those that have seen it.

In their review, Variety said that it is "a horror series that doesn’t immediately make a case for itself; like the best of the genre, it’s slowly insinuating, building in power as it tells a story of repressed trauma and family discord."

The Hollywood Reporter stated that the show is "scary as hell and possessed of enough character-centric nuance to carry viewers through to the end," while TV Guide said "it's as though Flanagan has taken Jackson's original work, shattered it and then rearranged the pieces to create a completely original, but equally brilliant tale."

The Haunting of Hill House is now available to watch on Netflix.

Critics Consensus: The Haunting of Hill House is an effective ghost story whose steadily mounting anticipation is just as satisfying as its chilling payoff.

The reviews are in. pic.twitter.com/FDcBy6LreY

popular
Brian Laundrie: 'Strong probability' remains found belong to missing fiance
QUIZ: Can you name all the countries beginning with L?
How to lower your cholesterol - 5 really handy tips
Warning issued over jelly sweets containing cannabis ahead of Halloween
WATCH: Micheál Martin and Danny Healy-Rae had an almighty row in the Dáil
The cast of Succession on the most ridiculously expensive scene in the show
Here's the lineup for this week's Late Late Show
You may also like
1 week ago
Alan Quinlan: Young people on social media are "suffering in silence... it's very, very dangerous"
1 week ago
A great Irish horror is among the movies on TV tonight
1 week ago
Squid Game fans spot massive clue in Tug of War game
1 week ago
COMPETITION: You're one very easy question away from winning a €200 One4All voucher
1 week ago
A brand new dark Irish comedy and 5 more movies and shows to watch this week
2 weeks ago
Disappointment as The Den has been cancelled again
Next Page