Davidson's ex-girlfriend Ariana Grande has since responded to his statement on her Instagram page.

Pete Davidson was at the heart of one of the most high-profile celebrity breakups in recent years.

The comedian split with Ariana Grande in May of this year, and seemingly everyone had an interest in every little detail about what went on between the two. 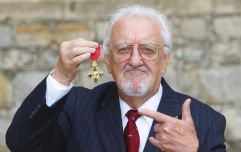 END_OF_DOCUMENT_TOKEN_TO_BE_REPLACED

And the drama hasn't stopped since the split.

Grande herself released what will definitely go down as one of the biggest songs of 2018, entitled 'Thank U, Next', a song that explores her past relationships, where, naturally, Davidson gets a mention.

The Saturday Night Live comedian has been quite vocal about his struggles since his split with Grande.

Most recently, he took to his Instagram page to condemn those online who have been "bullying" him in the past few weeks.

Perhaps the most powerful line in the statement read: "No matter how hard the internet or anyone tries to make me kill myself. I won't."

Grande responded to the post on her Instagram story, saying: "I will always have irrevocable love for him and if you've gotten any other impression from my recent work, you might have missed the point."