Pic: Ed Sheeran spotted in Summer Bay ahead of upcoming cameo role on Home and Away

No doubt Alf will end up kicking him out of the Diner for acting like a flamin’ mongrel.

Forget about cracking the USA, selling out huge venues worldwide or getting an album to number one, it’s only now that Ed Sheeran has well and truly made it.

As if he hadn’t already cemented legendary status in these parts, his credibility is likely to soar even further with an upcoming appearance on Home and Away, the Australian soap that’s arguably more popular in Ireland than in Australia itself.

Details about Ed’s role in the show are being kept under wraps for now, but he has been spotted on set at Summer Bay and an episode featuring the singer-songwriter is likely to go out later this year. 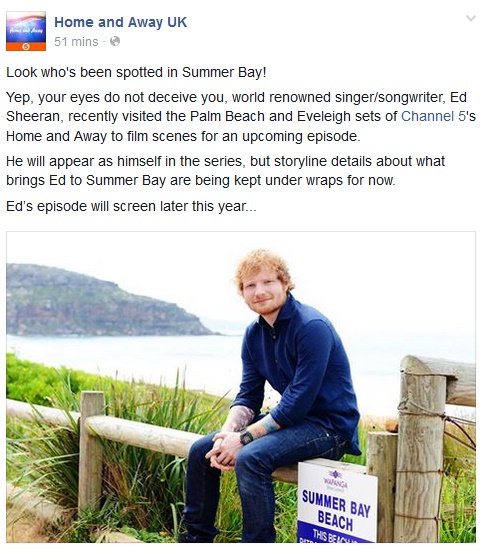 Pic via Facebook/Home and Away UK

While Ed is busy testing out his acting chops Down Under, it’s the perfect time to remind everyone of a Home and Away-themed event of far greater significance that will take place in Cork later this month.

END_OF_DOCUMENT_TOKEN_TO_BE_REPLACED

We’re talking, of course, about the presence of the one and only Alf Stewart (Ray Meagher) at the Bishopstown Bar in Cork this Saturday, which you can find out more about here.

We might be thinking out loud here but we reckon Ed has a way to go yet before he joins Alf on the A-team when it comes to superstar status.

With an appearance on a show as big as this, however, let's just say he's getting closer each day.

*JOE goes to get coat*

The Big Reviewski || JOE · The Big Reviewski with Y: The Last Man, that Malignant ending & a secret streaming service
popular
The JOE Friday Pub Quiz: Week 261
One of the best war films ever made is among the movies on TV tonight
The five "best places to live" in Ireland have been revealed
One of the better Liam Neeson action romps is among the movies on TV tonight
QUIZ: Flex your brain definition with this general knowledge quiz
Daniel Craig says goodbye to James Bond in emotional farewell speech
The 50 most iconic songs of all time* have been revealed
You may also like
3 days ago
Y: The Last Man star Ben Schnetzer on his brand new show, love for Diane Lane and pandemic productions
3 days ago
Stephen King has some amazing things to say about Netflix's new horror series
3 days ago
Y: The Last Man review: A slick, smart, end-of-the-world thriller series
5 days ago
HBO finally reveals the premiere date for Succession Season 3
5 days ago
If you liked Tiger King, then you need to check out LuLaRich
5 days ago
There is a completely overlooked streaming service available to Irish customers right now
Next Page