PIC: This is the note Robert De Niro sent to Meryl Streep after her Golden Globes speech

From one Hollywood legend to another.

Last year he said he wanted to punch the businessman in the face and now Robert De Niro has expressed his support for Meryl Streep, after her now famous Golden Globes speech against Donald Trump earlier this week.

What you said was great. It needed to be said, and you said it beautifully. I have so much respect for you that you did it while the world was celebrating your achievements. I share your sentiments about punks and bullies. Enough is enough. You, with your elegance and intelligence, have a powerful voice – one that inspires others to speak up as they should so their voices will be heard too. It is so important that we ALL speak up. 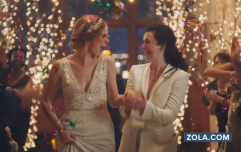 END_OF_DOCUMENT_TOKEN_TO_BE_REPLACED

In her speech, Streep focused on Trump's mocking of a disabled reporter during last year's presidential campaign.

"It kind of broke my heart... and I still can’t get it out of my head, because it wasn’t in a movie,” she said.

"It was real life. And this instinct to humiliate when it’s modelled by someone in the public platform by someone powerful, it filters down into everybody’s life, because it kind of gives permission for other people to do the same thing."


popular
QUIZ: How well do you know Will Smith's movie career?
The JOE Friday Pub Quiz: Week 174
Met Éireann issue low temperature weather warning for 25 counties
More bad news for gamers as another two of 2020's biggest games get pushed back
Boozy holidays in the Balearic Islands will change as new laws crack down on alcohol-fuelled trips
Temperatures drop to -4 as weather warning is in place for 17 counties
QUIZ: How many of these Disney Channel TV shows can you name?
You may also like
1 day ago
Study finds that cattle can talk to each other about how they feel
2 days ago
Ireland are looking for youngsters to represent us at Junior Eurovision
4 days ago
Six people dead after huge sinkhole in China swallows bus and pedestrians
6 days ago
Queen to hold crisis talks over Prince Harry and Meghan announcement
1 week ago
Iran admits it unintentionally shot down Ukranian airliner, killing 176 people
1 week ago
Iran 'mistakenly shot down Ukraine jet' says US media
Next Page