Piers Morgan tries to catch out Love Island contestant with maths question, makes fool of himself

One of the most famous moments of Love Island so far involved a conversation between the contestants about Brexit and the possible effects it might have on the UK.

Hey, @Theresa_May, you still need a good wingman for #Brexit? Give our girl Hayley a shout.#LoveIsland @LoveIsland #SaveTheTrees pic.twitter.com/MVUIUTl7pl 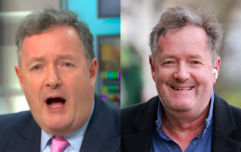 END_OF_DOCUMENT_TOKEN_TO_BE_REPLACED

But before you go judging the standard of the conversation, you should give this a read, because it looks like Hayley knew  what she was talking about when she asked about trees.

Alas, people were not impressed with Hayley Hughes as she faced elimination (that's what it is, right?) from the show.

She appeared on Good Morning Britain across from Susanna Reid and Piers Morgan on Wednesday morning and faced some questioning Morgan about things that weren't necessarily related to the show.

Morgan has been a constant critic of the show online, and has been critical of the intelligence of the contestants, even as recently as this week.

ALERT: Just been told we have a bunch of Love Island dimwits live on @GMB tomorrow. This could be... interesting. pic.twitter.com/qjPRnxvUBR

So when Morgan saw his chance to try and catch out Hayley with a maths question, he grabbed the opportunity with both hands, it's just a shame he didn't really know what he was talking about.

Does #LoveIsland's Hayley know anything about the Pythagorean theorem? Nope and neither do you @piersmorgan! pic.twitter.com/h3dsS3Aii1

Just for reference, the formal definition of Pythagoras' Theorem is: In a right angled triangle, the square of the hypotenuse is equal to the sum of the squares of the other two sides.

I’ve mugged myself off. 🙈🙈 https://t.co/zrbzaM8ksT

Moral of the story...