The poster for Ocean's 8 has arrived, and with it comes the best tagline of 2017

"Every con has its pros."

17 years after George Clooney assembled ten of his most handsome friends to take down three Vegas casinos, this time the ladies are showing them how it's done.

Sandra Bullock plays Debbie Ocean, the estranged sister to George's Danny, and she's got her eye on the Met Gala. Exactly why she wants to perform a heist there, and what exactly she has in her sights, is still being kept highly under-wraps.

Before she can pull off the con however, she must assemble the team, and from the poster, we can see that team consists of Cate Blanchett, Anne Hathaway, Mindy Kaling, Sarah Paulson, Awkwafina, Rihanna and Helena Bonham Carter. 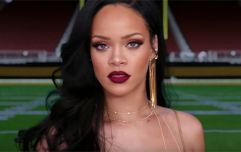 END_OF_DOCUMENT_TOKEN_TO_BE_REPLACED

Directed and co-written by Gary Ross (The Hunger Games, Pleasantville), there is huge scope here for the Ocean's franchise to continue on anew after the disappointing 12 and good-but-not-great 13, plus room for the two Ocean siblings to join forces for a Gravity reunion and plan the biggest heist imaginable.

And can we give some props to that incredible tagline? Sometimes the smartest stuff really is the simplest, and "Every con has its pros" is a piece of simple genius. Kudos to whoever came up with that. If there is a Best Tagline Award for Hollywood, we have this year's winner right here.

popular
20 years ago, one of the best sci-fi movies of the 21st century was a box-office bomb
U2 drummer Larry Mullen Jr. says band may perform without him in 2023
Peter Kay moved to tears on stage while opening his first stand-up tour in 12 years
Mia Khalifa claims seaside town is better than Miami
Simon Cowell concerns fans with appearance as they 'don't recognise him'
The 50 most iconic songs of all time* have been revealed
Patient arrested after switching off roommate's ventilator because it annoyed her
You may also like
7 months ago
A$AP Rocky detained at LAX in connection to November 2021 shooting
1 year ago
Barbados cuts ties with UK and becomes a republic
1 year ago
The top 10 'greatest of all time' songs have been revealed
1 year ago
Eminem apologises to Rihanna over Chris Brown lyric in new song
3 years ago
Rihanna turns down Super Bowl half-time show as she couldn't be "a sellout"
3 years ago
Rihanna is suing her father for allegedly trading on her Fenty brand name
Next Page