What a Character: Why Michael Scofield from Prison Break is a TV great

Prison Break is class. Sure it kind of lost the run of itself by the end, but at its best it was television at its most exciting.

Season one was one of the best seasons in recent TV history. Every single episode felt like a really good movie.

I've seen the show three or four times, and even watching some of the bits now I'm like "How are they going to get out of this one?"

And nine times out of ten, the answer to that question is two words: Michael Scofield.

Why he's a TV great: The man is a genius. His plan to break his brother, who was wrongly accused of murdering the Vice-President of America's brother, out of jail, was to tattoo an entire map of the entirety of the prison, as well as the actual blueprint itself, on his body.

How did he know the ins and outs of the prison to such an exact detail, including any potential weaknesses?

Well he was the bloody architect of the place, wasn't he!?

He was always just one step ahead of everyone else. Even when we thought he might have met his match Austin Mahone, he had the edge. He always had the edge. 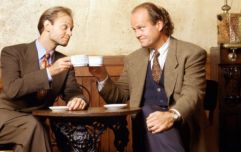 What a character: Why Niles Crane from Frasier is a TV great

END_OF_DOCUMENT_TOKEN_TO_BE_REPLACED

He was loyal, he was calculated, and nobody was a match for him.

Just as it looked like he was going to finally get caught, he would come up with some genius plan to get him and his pals out of it.

He gained the trust of the warden of the prison, became close friends with the man, and then pulled a knife on him at the perfect moment. His entire plan would have been ruined if he ever acted harshly, but despite the fact that his entire motive was driven by emotion, at no point did he let them get the best of him.

He had a pretty face, but don't be fooled. He had a mean streak too. He was willing to do anything to protect his brother and the woman that he loved.

If we could put him in another show: This is a tough one. We're gonna say LOST. Just because he definitely would have come in handy at some stage.

His best quote: “I’ll take 5 minutes of a situation I can control, over 50 years of one I can’t any day.”

His best scene: There's far too many to choose from. Basically everything in season one would apply here, but we're going to go with the scene where Scofield enters Fox River.

We see everything we need to know about him. A subtle confidence, a way with words, a target on his back, and a plan. Brilliant television.