Ricky Gervais has been criticised over jokes that appear in his latest stand-up special, with viewers describing the material as "hateful" and "transphobic".

The special, titled SuperNature, was released on Netflix on Tuesday, 24 May and features numerous gags targeted at trans people. Early in the special, Gervais discusses irony in comedy, stating: "There'll be a bit of that throughout the show.

END_OF_DOCUMENT_TOKEN_TO_BE_REPLACED

"That's when I say something I don't really mean for comic effect and you as an audience, you laugh at the wrong thing because you know what the right thing is. It's a way of satirising attitudes."

Moments later, the comedian launches into a monologue on gender.

"I love the new women... They’re great, aren’t they? The new ones we’ve been seeing lately. The ones with beards and cocks. They’re as good as gold. I love them.

END_OF_DOCUMENT_TOKEN_TO_BE_REPLACED

"And now the old-fashioned ones, they go like: ‘Oh, they want to use our toilets.’ ‘Why shouldn’t they use your toilets?’ ‘For ladies!’ ‘They are ladies — look at their pronouns! What about this person isn’t a lady?’ ‘Well, his penis.’ ‘Her penis, you fucking bigot!’ ‘What if he rapes me?’ ‘What if she rapes you, you fucking TERF whore?'”

A few minutes later, Gervais can be seen in the special turning his attention to cancel culture, saying:

"Now, no one saw that coming. You won’t find a 10-year-old tweet saying, ‘Women don’t have penises.’ You know why? We didn’t think we fucking had to!” 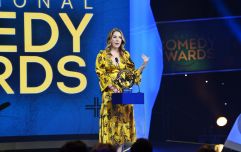 END_OF_DOCUMENT_TOKEN_TO_BE_REPLACED

Later, towards the end of SuperNature, Gervais explains why he believes it is acceptable to make jokes about trans people. "They just want to be treated equally. I agree. That's why I include them," the comedian says.

Describing criticism he has received in the past for jokes about trans people, Gervais also states:

"They go: 'No, he must mean that, right?' Like a joke is a window to the comedian's true soul. That's just not the case. I'll take on any view to make the joke funniest. Full disclosure, In real life of course I support trans rights. I support all human rights, and trans rights are human rights.

"Live your best life. Use your preferred pronouns. Be the gender that you feel you are. But meet me halfway, ladies. Lose the cock. That’s all I’m saying.”

The comments have proved controversial, with reaction on Twitter about the special leading to Ricky Gervais trending on the platform. In response to Gervais' comments, a trans woman tweeted:

“Ricky Gervais has a new stand-up show out on Netflix today. Five minutes in and he’s making jokes about trans women attacking and raping people in public bathrooms. To him, we exist only as a punchline, a threat, something less than human.”

Ricky Gervais has a new stand up show out on Netflix today.

5 minutes in and he’s making jokes about trans women attacking & raping people in public bathrooms. To him we exist only as a punchline, a threat, something less than human.

This is as other Twitter users took to the platform to condemn the special as "anti-trans", "transphobic" and "hateful".

Here’s my thing about the anti-trans “humor” from Ricky Gervais, Dave Chappelle and the rest: it’s not funny. It’s malicious and ugly. And it doesn’t fall under the heading of, “Relax, it’s comedy.” It comes under, “I’m gonna be an anti-LBGTQ bigot and use my job to shield me.”

I look at people like Ricky Gervais, JK Rowling, and Dave Chappelle, and my question is "why?" Aren't trans people's lives complicated enough without you giving hate a green light? Do you not realize that you're nurturing an atmosphere that leads to abuse, violence, even murder?

We’re rightfully focused on the transphobic, hateful material in Ricky Gervais’s new special, but what about the other parts, which are also bad?