As we mentioned previously, The Rubberbandits' latest guide to sex was always going to be must-watch TV as Blindboy Boatclub did his very best to help Mr Chrome get over his sexual hang-ups.

What exactly did they do?

END_OF_DOCUMENT_TOKEN_TO_BE_REPLACED

Well, it involved a bad case of St Antony's throat and a quest to retrieve James Joyce's vial of sperm from a bastard magpie. More about that later because the most important segment was left for the final few minutes.

On a more serious note, Blindboy Boatclub has rightfully been earning plaudits for his timely reminder on The Late Late Show about how Irish men need to embrace feminism.

In a segment that featured on last night's show, The 'Bandits urged the Irish people to "fuck repression, embrace perversion, but make sure there's consent". In doing so, you might find yourself "conkers deep in hoop".

Harnessing this spirit of sexual liberation, the duo then asked the Irish public to tell them about their sexual fantasies. Here's a brief insight into the kinky habits of the people who were interviewed.

Getting pissed on like R.Kelly. Sex on a mountain. Being lathered in butter before having it licked off. Riding their best friend's mother. Joining the mile high club. Fingers in the bum. Having sex at Anfield.

Nothing was off limits and it's all grand. Here's why. 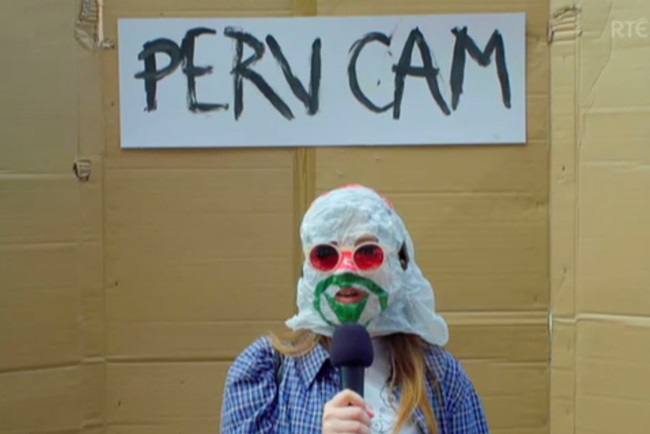 END_OF_DOCUMENT_TOKEN_TO_BE_REPLACED

As they've consistently done throughout their careers as  gas cuntists, the duo managed to juxtapose an important message while making us laugh and it all had to do with the issue of consent.

Do you know what. Here's their take on...

Looners - those people that are sexually aroused by balloons. That's grand.

Mecanofilia - people that are sexually aroused by machines. That's grand.

END_OF_DOCUMENT_TOKEN_TO_BE_REPLACED

What's not grand is when a man starts to rub a lady's back on the bus without consent. In the words of Mr Chrome and Blindboy, this is called 'toucherism'. There's no consent here and this is actually a crime.

This might be an obvious message, but it's an important one.

Plenty of people were happy that the topic of consent was raised.

The Rubberbandits are doing revolutionary work on RTE2. They give me hope. And laughs.

You can enjoy it all here.

The Big Reviewski || JOE · The Big Reviewski with Y: The Last Man, that Malignant ending & a secret streaming service
popular
The JOE Friday Pub Quiz: Week 261
One of the best war films ever made is among the movies on TV tonight
The five "best places to live" in Ireland have been revealed
One of the better Liam Neeson action romps is among the movies on TV tonight
QUIZ: Flex your brain definition with this general knowledge quiz
Daniel Craig says goodbye to James Bond in emotional farewell speech
The 50 most iconic songs of all time* have been revealed
You may also like
3 days ago
Y: The Last Man star Ben Schnetzer on his brand new show, love for Diane Lane and pandemic productions
3 days ago
Stephen King has some amazing things to say about Netflix's new horror series
3 days ago
Y: The Last Man review: A slick, smart, end-of-the-world thriller series
5 days ago
HBO finally reveals the premiere date for Succession Season 3
5 days ago
If you liked Tiger King, then you need to check out LuLaRich
5 days ago
There is a completely overlooked streaming service available to Irish customers right now
Next Page