Ryan Reynolds is bringing a reimagining of Home Alone to the cinema, titled Stoned Alone

Released back in 1990 (yes, you're old), Home Alone cost just $18 million to produce, and made over $476 million at the box office, so to say it was a bit of megahit is an understatement - it made more that year than Pretty Woman, Die Hard 2 or Total Recall.

One big sequel and a few lesser sequels followed, and quite frankly we're shocked that nobody has tried to remake it yet... although they would need to explain how the airport mixed up the tickets so badly that they didn't notice they were down a passenger on board. 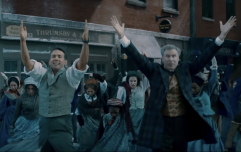 END_OF_DOCUMENT_TOKEN_TO_BE_REPLACED

Deadline are reporting that while Ryan Reynolds isn't steaming ahead with a production of an exact remake, it does seem to be taking some of the best bits and making it just for adults.

Stoned Alone will centre around a mid-20's stoner who completely misses his flight and ends up staying... well, home alone. However, all the drugs have made him more than a tad paranoid, and he begins to believe that his home is being broken into.

The thing is, mid-hallucination, a group of burglars do actually try to break into this home, and the stoner is having a hard time separating this reality from his drug-fuelled revenge-fantasy.

Reynolds is currently just on producing duties, with the film set to be directed by relative newcomer Augustine Frizzell, and the script is being delivered by the guys behind the latest Netflix teen-com The Package, which you can watch the trailer for right here:

popular
Here is a list of every Bank Holiday in Ireland in 2023
Nicola Bulley's phone found by the river 'could be a decoy', diving expert suggests
Teenager killed in shark attack after swimming with dolphins in Australia
One of the best crime thrillers ever is among the movies on TV tonight
Amazon Prime Video has just added 21 big movies to its library
The Last Of Us Episode Five will premiere days earlier in Ireland and UK
5 years ago, Hollywood took a massive gamble on a huge sequel... and lost big time
You may also like
1 month ago
Ryan Reynolds and Rob McElhenney discovered in FIFA 23
10 months ago
Why you should maybe expect much less sex and violence in Deadpool 3
10 months ago
The Adam Project is the most Ryan Reynolds movie that has ever Ryan Reynolds'd
11 months ago
One of the best Marvel comedies is among the movies on TV tonight
1 year ago
WATCH: The first trailer for Red Notice is here, Netflix's biggest ever movie
1 year ago
Free Guy features a huge Hollywood star we haven't seen on the big screen in YEARS
Next Page