They really should have tried harder than this.

The Simpsons episode no.633, titled No Good Read Goes Unpunished, aired in the States on Sunday 8 April.

It revolved around Marge finding an old book that she loved as a child and wanting to pass it on the Lisa, but upon re-reading it, she discovers that by today's standards, the book is actually incredibly offensive.

Which lead to this interaction between Marge and Lisa...

"Something that started decades ago and was applauded and inoffensive is now politically incorrect... What can you do?" pic.twitter.com/Bj7qE2FXWN

If you're not quite sure what that was all about, then let us bring you back a few months to the release of a documentary titled The Problem With Apu.

In it, an Indian comedian discusses the racial insensitivity that Apu is portrayed in by today's standards, and how that level of racial stereotyping can be incredibly damaging when it takes place in such a hugely popular show.

The documentary's director told IndieWire that, "Loving The Simpsons is like loving America, right? So there’s certain things about it I disagree with, so I protest. It’s like the anthem thing, with [Colin] Kaepernick. I’m not saying this is equivalent to it, but I’m saying it’s that kind of public discussion that we’re having.

"Is it OK to criticise things we hold sacred? Isn’t that what makes us good Americans, good Simpsons fans, thoughtful viewers, thoughtful humans, right? So I think that’s definitely a part of it." 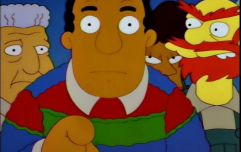 END_OF_DOCUMENT_TOKEN_TO_BE_REPLACED

A few months back, it did appear that The Simpsons were going to tackle the issue head-on, with Apu voice actor Hank Azaria telling TMZ that, "I think the documentary did make some really interesting points, and gave us a lot at The Simpsons to think about and we really are thinking about it."

"Definitely anybody that was hurt or offended by any character or vocal performance (makes it) really upsetting that (it) was offensive or hurtful to anybody. I think it’s an important conversation and one definitely worth having. We’re just really thinking about it and it’s a lot to digest."

However, the clip seen above did not please viewers, who seen the show is more or less completely dodging the bullet, including the documentary's director:

Wow. “Politically Incorrect?” That’s the takeaway from my movie & the discussion it sparked? Man, I really loved this show. This is sad. https://t.co/lYFH5LguEJ

The Simpsons response to The Problem with Apu: a callous and resentful shrug. pic.twitter.com/8N6XRzNvsi

As far as Apu on The Simpsons goes, I remember years ago vaguely thinking that the character seemed offensive and then figuring that since nobody seemed to have said anything, maybe it wasn't. So yeah, Simpsons, people noticed years ago, it's just nobody had a platform.

House of Rugby Ireland · Quinn Roux on finding a home in Ireland and Mike McCarthy brings the absolute HEAT!
popular
The 50 most iconic songs of all time* have been revealed
Man arrested and charged for breaching Covid regulations in Kildare
QUIZ: Name all the countries of the EU that contain 2 vowels or less
This hidden Back to the Future 'mistake' has a subtly brilliant explanation
QUIZ: Can you name all the teams in the NBA from their locations?
Joe Biden inauguration rehearsal paused as Capitol building goes into lockdown
The JOE Friday Pub Quiz: Week 226
You may also like
3 months ago
QUIZ: Match The Simpsons quote to the character who said it
3 months ago
QUIZ: Name the obscure characters from The Simpsons (Part Three)
5 months ago
QUIZ: Name the films referenced by The Simpsons
8 months ago
The top five episodes of The Simpsons
9 months ago
If TV Shows were set during Self-Isolation
1 week ago
Here are the best movies on TV this evening
Next Page