It's all kicking off in the Love Island villa, frankly at quite an alarming rate.

Last night's show was gripping, intense, and grippingly intense. Critics are giving it five stars in terms of bants.

If you spent the duration of the show intermittently scrolling through Twitter so that you could send the dankest memes into the group chat before anyone else, it's likely you missed a few vital moments.

Not to worry, I got you.

1. E.T. made a brief but noticeable appearance in the villa 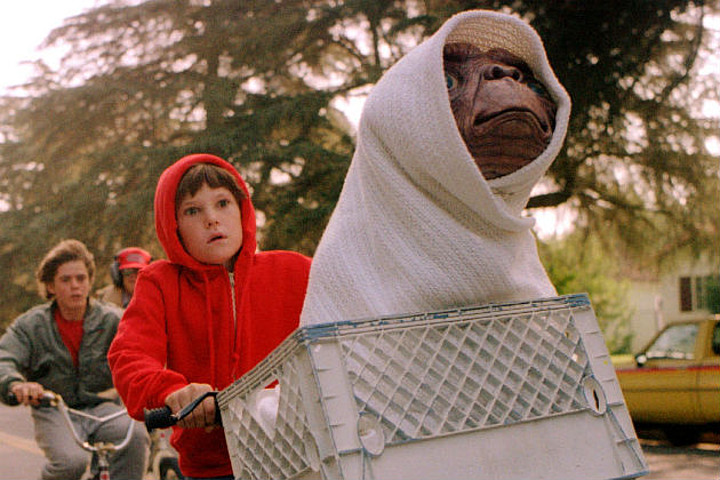 Everyone's favourite extra terrestrial was spotted in the background socialising during last night's Love Island, which has understandably sparked rumours that the lanky-fingered freak might be revealed as a contestant during tonight's show. Inevitably, all of the girls will step forward in the hopes of bedding the famed alien, adding some eggs to his little bicycle basket and connecting with him on a level that the little creature perhaps hasn't experienced before.

The boys in the villa will be devastated as they realise that their sculpted eyebrows and bodies cannot compete with titular character of one of the greatest movies ever made. Their chat, charm and flanter will be no match for E.T.'s glowing heart, wrinkly skin and dazzling personality. For their fragile egos' sake, we must hope that this incident was merely an authorised set visit that was accidentally caught on film.

2. Tommy bravely confessed to being a Hannah Montana fan

Noted beefcake and all round hard but secretly soft man Tommy Fury last night confided in his Love Island housemates, feeling comfortable enough on his first night in the villa to tell them that he is actually a Hannah Montana fan. No further details have been given, but it's only right that we applaud such bravery from the gigantic mountain of a man. Heavy under the weight of this secret, Tommy was quick to assure people that the only kind of fighting he's interested in, is the urge to tell people that Miley Cyrus and Hannah Montana, two people that look and sound completely alike, are actually the same person.

Tommy has taken a brave step here in admitting his keen interest in the teen idol. It's expected that this revelation will give other Hannah Montana fans the strength and courage to come forward and admit their fondness for the fictional character. Our respective televisual interests don't define us, they are merely a facet of our complex and ever-evolving personalities. If a boxer can proudly come out as a Hannah Montana fan, you can admit to enjoying Love Island.

3. A ghost was spotted in the Love Island shower

In a blink-and-you'll-miss-it moment during last night's show, a ghost was spotted in the famed Love Island indoor shower. The ghost appeared to be very troubled, possibly returning to the villa to tend to some unfinished business. Nobody approached the ghost as they were all busy flirting with each other in the garden, but we can exclusively reveal that the ghost drew a very small but prominent phallic shape on the fogged-up glass shower door. We've contacted many experts and every one of them was left completely baffled about the relevance of this symbolism.

Perhaps it is the ghost of Marcel past, returning to remind the Love Island contestants and viewers that he was in Blazin' Squad, maybe it's Doctor Alex popping back in to encourage the use of suncream to avoid turning a disturbing shade of pink every time you're exposed to the sun, or was it Harvey, they guy who wanted people to #StayHumble just like he had done after an impressive handful of days in the villa. Whatever the reason for this ghost's visit (and for some reason, shower), we must respect the occult and wait for further information.

4. Tommy Fury revealed himself to be a Never Nude

But minutes later we see Tommy emerging from the same shower, still in his boxers and carrying a towel. What does this mean? Very simply, Tommy Fury is a Never Nude. He has never in his natural life been entirely naked because the sensation bothers him immensely. He showers in boxer shorts, then wears that exact same pair for the rest of the day, allowing them to slowly dry and unstick from his flesh. Keep an eye on this throughout the series, it cannot be a mere coincidence.

5. The villa was infected with a gross skin condition called Dried In Pink Shit

Just two days into Love Island 2019, the entire villa and its inhabitants have developed a nasty skin condition that scientists are speculating has resulted from somebody having a wee in the swimming pool. This cannot be proven as the production team forgot to put that special dye in the water which turns it green after someone has a wee, so we are forced to guess who has done a number one in the Love Island swimming pool:

6. Tommy Fury eats his sandwiches like an absolute sociopath

It truly was the Tommy Fury Experience on last night's Love Island as we saw the boxer bulldoze his way through the villa both in terms of women and also sandwiches. Joe was nowhere to be seen as Michael, Tommy and Callum tucked into some breaded delights, presumably tiding themselves over until dinnertime. In the midst of the chaotic villa life, it was nice to see the boys sitting down at a proper table and eating together, ideally after saying grace to the good Lord of sandwiches.

But look at Fury's technique here. It's an abomination. He's blatantly cut the sandwich into triangles, a flamboyant but correct decision, and started eating on the crustless side, as is perfectly fine. But now he's lining up a crusted side for his next bite, abandoning the structure he had already teed up. This is pandemonium. Tommy Fury appears to eat every crusted edge of a sandwich first, leaving a perfect soft middle for his final bite. Hang on, that's genius. Fuck. He is the greatest innovator of our generation.