The first part of the documentary, titled If Something Happens To Me, will air on Sunday 3 November at 9pm on Sky Crime. It will also be available on NowTV.

An unsolved mystery steeped in tragedy, the documentary delves into the story of Susan Cox Powell, who was 28 years old when she disappeared from her Utah home in 2009. 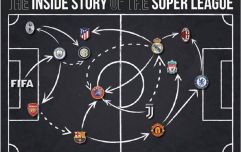 END_OF_DOCUMENT_TOKEN_TO_BE_REPLACED

Upon her disappearance, her husband Josh Powell was named as a suspect almost immediately. Police also surveilled Josh's brother, Michael.

However, more than two years later, and after an unsuccessful police investigation, the unthinkable happened: after losing custody of the children to Susan's parents, Josh took his own life along with the lives of his two sons.

This two-part documentary attempts to uncover new details of the final years of Susan’s life and contains home recorded footage taken by her father-in-law, Steven Powell, which paints a disturbing picture of a man with an unnatural and dangerous obsession.

The documentary first aired on Oxygen in the United States - and you can check out the trailer for it below.