EXCLUSIVE: The director of The Staircase reveals he's already working with Netflix on his next project

We have another exciting documentary series to look forward to!

Have you watched The Staircase on Netflix yet?

If yes, then continue on.

If not, then stop what you're doing and consume it now, because everyone is talking about Jean Xavier De Lestrade's documentary series revolving around the strange circumstances of the death of a woman back in 2001. 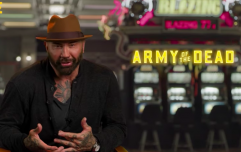 END_OF_DOCUMENT_TOKEN_TO_BE_REPLACED

Earlier this week, we revealed that De Lestrade had his own opinion on the controversial Owl Theory around the murder case within his documentary, but we had to ask, now that he has a good working relationship with Netflix, what does he have lined up to do next?

"Well, we are now producing a new series for Netflix, and... but... Wow, you know, you have to realise to find a good story, a good case, it takes a lot of energy. It took us one year to find what could be a good story for a documentary series for six or eight hours.

"So we just started producing, filming, shooting that series, and maybe in two, three or four years you'll be able to watch it, hopefully!

"We couldn't just let that lie there, so we had to ask if he could give us a hint as to what this new documentary series would be about?

END_OF_DOCUMENT_TOKEN_TO_BE_REPLACED

But at least we know there is more on the horizon from De Lestrade, and if it is even half as good as The Staircase was, then we should all be very excited about it.

popular
Gardaí seize phone of Dublin publican amid Leo Varadkar leak inquiry
Cat jumps from fifth-floor of burning building in Chicago and runs away unharmed
"Genius" Irish woman pretends to work in Penneys to shop without appointment
QUIZ: Can you name all the countries in the world containing the letter 'Z'?
QUIZ: How many of these characters from The Simpsons can you name?
Here's the lineup for this week's episode of The Late Late Show
Three teens arrested over Howth Junction incident where a girl was knocked onto train tracks released without charge
You may also like
1 week ago
Netflix's new thriller Awake puts us in a world where people can no longer sleep
1 week ago
WATCH: Netflix's upcoming show Sweet Tooth is a comic book series with a twist
2 weeks ago
Netflix’s new true crime documentary could be your next TV obsession
3 weeks ago
Brand new David Attenborough nature doc drops on Netflix today
3 weeks ago
The full list of all the new shows and movies coming to Netflix in May
3 weeks ago
The Mitchells vs. The Machines review: The funniest animated movie in years
Next Page