Steve Carell has discussed the possibility of Anchorman 3

He said that he's up for it!

Anchorman 2 was a great movie. There. We said it.

The 2013 movie has boasts a measly 6.3 on IMDB, which is just down right insulting. 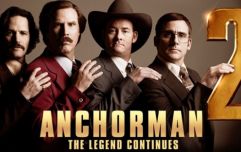 END_OF_DOCUMENT_TOKEN_TO_BE_REPLACED

It's hilarious, and its only flaw might be that it's not as good as the first one. But very few comedies could live up to the incredibly high standard that the original set.

So next time you're watching Anchorman 2 (which is on Netflix, by the way), don't be so harsh on it...

Now that we've gotten that out of the way, is it time to start looking forward to a third Anchorman movie?

One of the franchise's most hilarious characters says that he's up for it anyway. 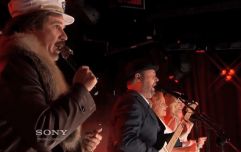 END_OF_DOCUMENT_TOKEN_TO_BE_REPLACED

Steve Carell, who plays Brick Tamland, said in a recent interview that he's ready and willing if ever a third movie is on the cards.

Speaking to Variety, Carell said: "If they make another one, I’ll do another one. Those are really fun. That’s just hanging out with friends and being silly."

Recently we shared the news that Will Ferrell was starting a podcast as Ron Burgundy, and Carell has said that he (and Brick) would be more than happy to lend their voice to the show.

Even if we don't get Anchorman 3, we'll settle for hearing those two characters back together again.

popular
QUIZ: You'll need to be razor-sharp to get 100% in this General Knowledge Quiz
The JOE Friday Pub Quiz: Week 307
The JOE Music Quiz: Week 117
An exciting Irish crime thriller is among the movies on TV tonight
Shooting stars set to light up Ireland's skies this weekend
James May reportedly hospitalised after crashing into wall at 75mph filming new show
Record for hottest August day in Ireland ever has now been broken
You may also like
3 years ago
WATCH: Ron Burgundy challenged one of 2019's biggest pop stars to a jazz flute challenge
8 years ago
Pic: According to Wikipedia, Ron Burgundy guided Kilkenny to the 2006 All-Ireland hurling title
8 years ago
Video: Ron Burgundy gives ‘Edna’ Kenny some advice for his national address this weekend
8 years ago
Video: Ron Burgundy stays classy as he anchors a real live TV news report
8 years ago
JOE's favourite funny films from the lads of Anchorman's Channel 4 News Team
8 years ago
High in the sky – Bundles of pot fall from the air in San Diego
Next Page