The intro in question showed a caravan being kicked off of a cliff into the sea.

TG4 have issued an apology for an intro to a news bulletin on Wednesday night that was deemed insensitive in the wake of events that occurred during Storm Ali.

The intro in question showed a caravan bring kicked off a cliff into the sea and was broadcast on the same day that a woman passed away in Galway as a result of her caravan being blown off a cliff in the inclement weather. 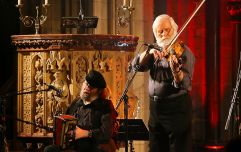 END_OF_DOCUMENT_TOKEN_TO_BE_REPLACED

After a clip of the intro gathered traction on social media, TG4 issued an apology on Thursday, referring to the broadcast of the intro as "unfortunate".

A spokesperson for the channel said: "The ident is one of a series of six idents, running since 2013, which are auto-scheduled.

"The ident broadcast once yesterday, and was immediately removed from the schedule.

"TG4 sincerely apologise for the unfortunate scheduling of this ident and for any undue stress caused."