After airing for two seasons on NBC, the show suffered low ratings and was in danger of cancellation by the second season. To save the series, NBC struck a deal with DirecTV to co-produce three more seasons, with the writers making the clever move to switch the focus to East Dillon in Season 4.

END_OF_DOCUMENT_TOKEN_TO_BE_REPLACED

The Panthers were out, the Lions were in and this change brought a resurgence of energy and new characters to the drama.

However, before the Lions could take State, they had to start at the very bottom and for Coach Taylor, his lowest ebb came when he asked his side to forfeit an early-season disaster.

However, the rematch would be different as Vince Howard took his team into the lions' den during the Kingdom episode.

Earlier in the episode, we're told by Coach Taylor that "success is not a goal, it's a byproduct" but when the playing field isn't even, what can you do?

END_OF_DOCUMENT_TOKEN_TO_BE_REPLACED

After taking to the field, it's clear that the Lions aren't going to get a single fair call from the referee and in a moment that's very unlike Coach Taylor, he encourages his team to start playing some "thugball".

No longer are the Lions going to be pushed around, ridiculed, or disrespected.

Away from home, backs against the wall, and staring into a cauldron of hostility and hate, Vince Howard steps up and proves that he's got what it takes to lead this side.

Away from the field, there's also some lovely bonding moments as Buddy Garrity Jr. integrates into the team while back in Dillon and a moment when you see just how much of an escape football is to these young men when Tinker complains about not being able to sleep in a hotel away from “cop cars and crackheads.”

END_OF_DOCUMENT_TOKEN_TO_BE_REPLACED

After arriving in Kingdom, the Lions faced some big questions over their mentality and title credentials. As they make the trip back to East Dillon, the entire group knew that they were on the cusp of something special.

As you can see on IMDB, Kingdom ranks pretty highly on the list of the best Friday Night Lights episodes.

In fact, we'd place it even higher than it's current ranking of ninth.

You can judge for yourself when Friday Night Lights airs at 11.45pm on TG4 tonight (13 August). 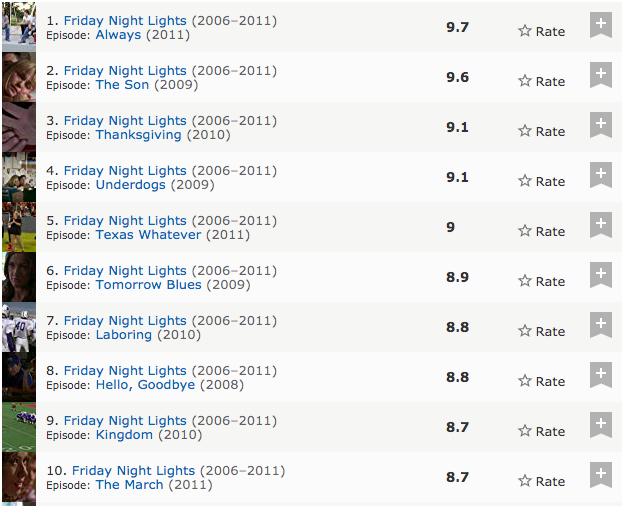 popular
The JOE Friday Pub Quiz: Week 323
Simon Cowell concerns fans with appearance as they 'don't recognise him'
People are realising what the red Christmas lights are really for
Miss Croatia wears revealing outfit at World Cup game despite Qatar's dress code
Bad Sisters stars snap back at New York Times article that called them British actors
Netflix has just added 30 big movies to its library
Orange is the New Black actor Brad William Henke dead aged 56
You may also like
1 day ago
Simon Cowell concerns fans with appearance as they 'don't recognise him'
1 day ago
Here's the line-up for this week's episode of The Late Late Show
2 days ago
Star of the Terrifier movies plays a killer Grinch in new Christmas horror
3 days ago
Die Hard and Top Gun actor Clarence Gilyard has died, aged 66
3 days ago
Will Smith 'completely' understands if people aren't ready to see his first post-slap movie
3 days ago
One of the scariest films of all time is among the movies on TV tonight
Next Page