One of the most anticipated movies of 2019.

Any way you slice it, that's some major pedigree for any film to boast.

END_OF_DOCUMENT_TOKEN_TO_BE_REPLACED

There has been much hype surrounding The Irishman, Netflix's upcoming gangster epic.

The real-life story is a legitimately incredible one, as told in New York Times best-selling book I Heard You Paint Houses.

It tells the first-hand tale of Frank Sheeran – a man of Irish descent, a trusted mafia hitman, and the likely murderer in one of the most notorious and unsolved crimes in modern American history; the killing of Teamster’s boss Jimmy Hoffa.

We got the first look at the film adaptation a little while ago, and it would appear that everyone is bringing their A-game. Bringing Joe Pesci out of retirement means this thing has to be pretty good, right?

Now comes another glimpse of the project, though it's really more of a listening experience.

On Sunday night, as the Oscars played out, Netflix released a teaser for The Irishman, one that pushes some familiar and compelling voices front and centre. 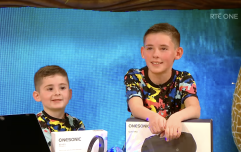 END_OF_DOCUMENT_TOKEN_TO_BE_REPLACED

Yep, not much to go on, really. Probably why they call them 'teasers', you suppose.

BUT THAT CAST! WITH BULLETS IN THE FONT!

Ahem. The hype is very much real. Roll on autumn.

In the meantime, you can revisit our interview with author Charles Brandt here.