The look of the Irish; Fashion, Irish style

Blue twine as a belt

This particular fashion trend may never have left rural Ireland, but it is surely only a matter of time. Generally employed by gentlemen farmers of a certain vintage, the ubiquitous blue twine is not chosen to pick up the farmer’s eyes, or to match his Ford tractor. It is used for its famed durability, and it has kept many a man’s pants up in both emergency, and non emergency situations.

END_OF_DOCUMENT_TOKEN_TO_BE_REPLACED

The unending popularity of the Irish made deck shoe continues to baffle. While most trends last mere months if they are lucky, Dubes (Dubarry deck shoes) have been popular for over a decade at this point and continue to be the footwear of choice for many youngsters around leafy south Dublin and other affluent parts of this fair isle. They’ve even made it into the Urban Dictionary, so they’re like, totally, here to stay.

Ireland is not unique in loving to wear sports team’s shirts as casual wear. But the popularity of GAA shirts in Ireland is off the charts. From babies to grannies, everyone seems to own one, or a special edition pink one, and the shirts are not just for matchday. Oh no. At every conceivable Irish gathering, there will be a GAA jersey, and when you are on holidays, if you haven’t spotted one within 24 hours you’ve gone somewhere more remote than even Bear Grylls would consider.

END_OF_DOCUMENT_TOKEN_TO_BE_REPLACED

Wearing two polo shirts at once

A Dublin 4 phenomenon that can probably be laid squarely at the feet of Abercrombie and Fitch. To be honest, it’s great for them as they get you to buy two bits of kit instead of one. Having the collars popped is a must too.

END_OF_DOCUMENT_TOKEN_TO_BE_REPLACED

To paraphrase Billy Joel, we didn’t start this fire but by God we have kept pouring the fuel in. Probably the best known of all fashion faux pas, you will still see the socks and sandals combo at alarmingly high intervals in Ireland. We know the weather is very changeable here, but make a decision and stick with it. Warm weather; wear sandals. Cold weather, socks and shoes. Don’t mess with that simple formula... 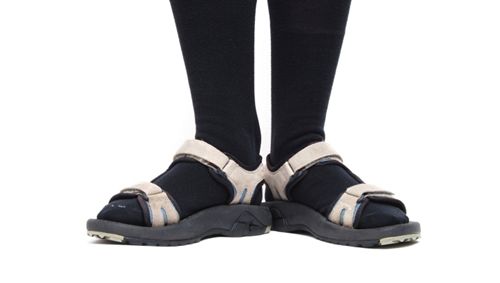 Wearing lifejackets in the pub

We have been advised that this is a definite thing in parts of west Cork but if you have spotted it elsewhere in the country do let us know. Laziness after a hard days yachting, precautionary in case a wave hits the boozer or a way of making sure everybody knows you have a boat. It’s definitely one of those three options.

The old story about Americans wandering around an Irish town and wondering if they were in an Olympic village is probably apocryphal but entirely understandable at the same time. The humble trackie might be the most common sight on Irish streets and we have a feeling that most of the wearers aren't on their way to or from the gym.

That said, they cut across all social classes, only the brands change and EVERYBODY has a pair, even if they won't admit it.

Like the Red Hot Chilli Peppers and red lemonade, Ireland is the last place that these denims are popular. Wiped off the face of the earth by skinnier models in most of the western world, the bootcut jean lives on here in fine numbers, dragging its soggy hem around like a badge of honour.

While not as popular as it once was, any lunchtime trip to your local Spar at the weekends will still bring you face to face with someone dressed for bed. Somehow we have grown to accept this, even embrace it a little, and it has become an Irish fashion statement. The statement being, we love bed and can’t be arsed getting changed to go get some fags, the paper and a loaf of bread.

For more insights into Irish style, sort of, check out the new series of Damo and Ivor, which starts on MondaySeptember 16 at 10.00pm on RTÉ Two.

popular
New car-free town with population of 85,000 set to be built in Dublin
Elderly Irish man stabbed to death on mobility scooter in London
Galway City Council street cleaners claim Lotto jackpot worth over €5.5 million
Here's how to make €9-11 on Revolut in just a few minutes
QUIZ: Can you name all the countries beginning with A?
Articulated lorry driver in his 20s dies in Tyrone
A terrific '90s crime drama is among the movies on TV tonight
You may also like
4 days ago
QUIZ: Match The Simpsons quote to the character who said it
6 days ago
The new Love Island and 8 more new movies & shows to watch this weekend
1 week ago
WATCH: House of Hammer details the alleged crimes of award-winning actor Armie Hammer
1 week ago
Prime Video has just added 25 very big movies to its library
1 week ago
5 must-watch shows and movies streaming on NOW in August
1 week ago
Two long-thought-dead Marvel projects appear to be in the works
Next Page