Fans of the cult-classic will be delighted.

We're massive fans of Predator and despite the fact that John McTiernan's cult-classic returning to the cinema, our infrared sensors are also firmly focused on Shane Black's new film in the beloved franchise, The Predator.

Of course, fans will know that the Kiss Kiss Bang Bang and Lethal Weapon creator actually starred in the original - he played Hawkins - and with expectations high, Black doesn't have time to bleed as he completes his new adaptation.

The director has previously said his film will be gory as hell and one of its stars, The Mist's Thomas Jane, has provided a few details about the plot.

In an interview with Shadow Nation, Jane talked about the new bunch of killers that are hunting the Predator.

He said: "We play these veterans from like Afghanistan, Iraq war or whatever. But we’re all fucking crazy so we go to the VA hospital to get our meds. We’re all like shellshocked, PTSD…soldiers. We’re at the VA hospital and we’re in group therapy and of course, somebody flips out…this is backstory, I don’t think we really see this…somebody flips out and we all get arrested and get thrown onto the bus to go down to the hospital and they throw this other guy on the bus too."

Jane added: "And he’s a guy they’ve actually marked to kill him because he’s seen a UFO, he’s seen the Predator ships come down so they lock him up and throw him in with us lunatics. They’re going to take that bus, drive it down to a ditch and shoot us all just to get rid of this one guy. But, of course, we take the bus over and we’re all like “fuck that man, let’s go kill these fucking Predators ourselves” and we’re just crazy enough to believe that this guy really did see a UFO and there are these aliens out there. So that’s kinda cool!”

How insane and brilliant does that sound? 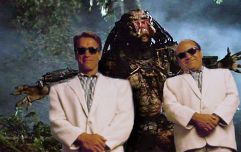 Arnie won't be back for new Predator movie, confirms Triplets is in the works

END_OF_DOCUMENT_TOKEN_TO_BE_REPLACED

Given the fact that the gang of killers in the original film weren't exactly the most stable bunch of people - Billy goes mano-a-mano with the Predator using just a knife while Blain 'ain't got time to bleed' - this sounds very much like a spiritual sequel to the madness that developed in the jungle.

Given Black's reverence and love for the material, we're expecting plenty of gore, action, and one-liners.

The Predator blasts into cinemas on August 3, 2018.

Get to the cinema!

The Big Reviewski || JOE · The Big Reviewski with Y: The Last Man, that Malignant ending & a secret streaming service
popular
UK company adopts four-day work week so employees can focus on themselves
EY announces 816 new jobs across Ireland
Larry Bass resigns from RTÉ board just one day after first board meeting
Aer Lingus announces flight sale as US to lift travel ban for vaccinated EU passengers
Cork City Centre described as a "no go area" after man pulled from wheelchair in violent attack
The first ever foldable hotel room has been launched in Ireland
WATCH: Margaret Thatcher was briefly resurrected at the Emmy Awards
You may also like
6 years ago
Pic: This Predator-inspired living room is our new favourite thing
7 years ago
Happy Birthday Arnold Schwarzenegger: Here are 10 of our favourite quotes from his films
7 years ago
Video: Adidas’ new Predator Instinct boot includes the tongue from the very first pair of Preds
7 years ago
New Predator film on the way with the writer of "Kiss Kiss, Bang Bang" attached
7 years ago
JOE's Creature Feature - the greatest movie monsters from the genius mind of Stan Winston
7 years ago
JOE of the Jungle – our favourite jungle survival movies
Next Page