The system works! Conor Kenny will get to meet his heroes Take That on Friday

Ryan Tubridy announced the news on his radio show this morning.

Conor Kenny will get to meet his idols as Take That perform on The Late Late Show on Friday night.

A week long campaign was launched by Conor's mother Angie and sister Fauve to get him to meet Howard Donald, Mark Owen and Gary Barlow.

Ryan Tubridy announced on his radio show this morning that Conor, who suffers from Down Syndrome, has been invited on to the show with his mam and will meet the trio.

Earlier this week, both Donald and Barlow gave their support to Conor. 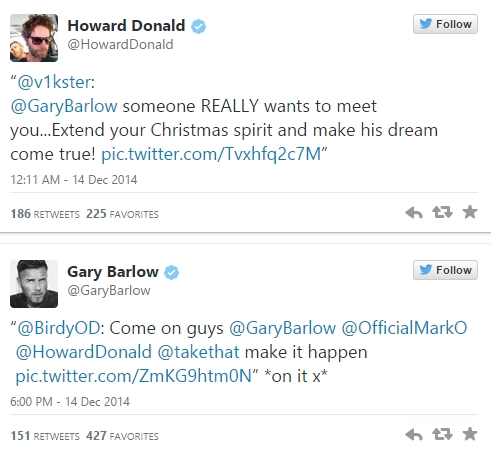 popular
Amazon Prime Video has just added 38 very big movies to its library
Mia Khalifa claims seaside town is better than Miami
The 50 most iconic songs of all time* have been revealed
The Banshees Of Inisherin is arriving on Disney+ sooner than you might expect
U2 drummer Larry Mullen Jr. says band may perform without him in 2023
Woman hit by rollercoaster is trapped in own body after finally awaking from coma
Cruise ship passenger who fell overboard swam with sharks for 20 hours
You may also like
3 days ago
The JOE Friday Pub Quiz: Week 323
4 days ago
BBC Radio will play edited version of Fairytale of New York for first time
6 days ago
Olly Murs slammed over 'misogynistic' lyrics on 'shocking' new single
3 weeks ago
Paul Weller labels The Cure's Robert Smith a 'fat c**t' in interview
3 weeks ago
JOE's Daily News Hub - November 2022
4 weeks ago
Cher, 76, confirms relationship with man less than half her age
Next Page