These horror films on Netflix are a must watch over Halloween

There's something to scare the s**t out of everyone here.

I genuinely believe that it's getting harder to scare audiences as seen by the fact that those horrendous Twilight films have somehow managed to make vampires look uncool.

David from The Lost Boys must be turning in his grave (if he had one that is).

This being said, no guts no gory and with that in mind, here's a nice mix of some new, cult and classic horror films that are currently available on Netflix.

The gory details: Mysterious deaths surround an American ambassador. Could the child that he is raising actually be the anti-christ?
Serene sleep or scared s**tless?: If you're one of the five people in the world that hasn't seen this horror masterpiece then go and watch it. It's a classic of the genre with some truly memorable death-pieces. This music alone is enough to haunt your dreams for an eternity.

The gory details: A rescue crew investigates a spaceship that disappeared into a black hole and has now returned...with someone or something new on-board.
Serene sleep or scared s**tless?: Comfortable with seeing chests being ripped open and eyes gouged out? In space everyone can hear you scream.

END_OF_DOCUMENT_TOKEN_TO_BE_REPLACED

The gory details: Natives of a small isolated town defend themselves against strange underground creatures which are killing them one by one.
Serene sleep or scared s**tless?:There are more laughs than frights here. If you fancy a few small jumps then this is for you because the gags and characters are much stronger than the scares. 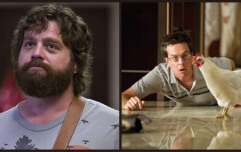 END_OF_DOCUMENT_TOKEN_TO_BE_REPLACED

The gory details:  A freak storm unleashes a species of blood-thirsty creatures on a small town, where a small band of citizens hole up in a supermarket and fight for their lives.
Serene sleep or scared s**tless?: If you've a phobia of spiders then this is definitely not for you. It's a bloody brilliant film though that's worth your time.

From Dusk 'till Dawn

The gory details: Attempting to cope with her mother's murder, Sydney and her horror movie-obsessed friends are stalked by a murderer who seems to have a hard time letting the past go.
Serene sleep or scared s**tless?:Pardon the pun but the deaths are brilliantly executed while the ironic, detached and meta approach always means that it's impossible to be too scared. It's pretty harmless....Drew Barrymore might disagree though.

The gory details: Slacker Anton wakes up one Halloween morning to discover that both of his parents have been turned into two headless Halloween decorations. After speaking to his equally irresponsible friends, Mick and Pnub, he discovers that his right hand has a blood-thirsty mind of its own and is hell-bent on wreaking havoc whether he likes it or not.
Serene sleep or scared s**tless?: It's one of the lesser known horror-comedies on Netflix but it's still worth checking out. Oh yeah, Jessica Alba is exceptionally lovely in it.

Tucker and Dale Versus Evil

The gory details: Tucker & Dale are on vacation at their dilapidated mountain cabin when they are attacked by a group of preppy college kids.
Serene sleep or scared s**tless?: People fly into woodchipping machines but you're laughing your ass off as it happens. This film is a macabre hidden gem and it's definitely worth checking out.

The gory details: Two death-obsessed sisters, outcasts in their suburban neighborhood, must deal with the tragic consequences when one of them is bitten by a deadly werewolf.
Serene sleep or scared s**tless?: The initial werewolf attack is pretty brutal but the film is excellent in terms of its social commentary and narrative that depicts two girls that are experiencing the pains from coming-of-age.

The gory details: Would you kill to live? When a madman tries to teach how much life is worth, two men find themselves in a room with no idea how they got there or why they're there.
Serene sleep or scared s**tless?: The original is actually quite timid when compared to the sequels that followed. It's grand.

House of The Devil

The gory details: In 1983 during a full lunar eclipse, Samantha Hughes takes a babysitting job where she finds herself in a mysterious house with a terrifying secret.
Serene sleep or scared s**tless?: Tension slowly, slowly, slowly builds up until the last 30 mins when hell breaks loose. If you've seen Suspiria then you know what to expect.

The gory details: hree film students vanish after traveling into a Maryland forest to film a documentary on the local Blair Witch legend, leaving only their footage behind.
Serene sleep or scared s**tless?: After the recent 'gorno' craze in Hollywood, this film seems like an episode of Peppa Pig in comparison.

The gory details: A shy student trying to reach his family in Ohio, a gun-toting tough guy trying to find the last Twinkie, and a pair of sisters trying to get to an amusement park join forces to travel across a zombie-filled America.
Serene sleep or scared s**tless?:Your ribs might hurt because it's so funny. It's like a mix of Shaun of the Dead with the Looney Tunes.

The gory details: Newlyweds are terrorized by demonic forces after moving into a large house that was the site of a grisly mass murder a year before.
Serene sleep or scared s**tless?: There are a few decent jumps but it lacks the mystique of the original.

Cabin In The Woods

The gory details: Five friends go for a break at a remote cabin in the woods, where they get more than they bargained for. Together, they must discover the truth behind the cabin in the woods.
Serene sleep or scared s**tless?:There's gore and a merman here but this film is unique because (hipster klaxon alert) it's an existentialist breakdown of the horror genre that's equal parts parody and homage.

Did I say that it has a merman?

The gory details: A family looks to prevent evil spirits from trapping their comatose child in a realm called The Further.
Serene sleep or scared s**tless: The film achieves one of the most elusive things in horror, the holy crap day-scare.

The gory details: Toxins begins to turn the residents of Ogden Marsh, Iowa into violent psychopaths, sheriff David Dutton tries to make sense of the situation while he, his wife, and two other unaffected townspeople band together in a fight for survival
Serene sleep or scared s**tless?: One word, pitchfork.

The gory details: Carrie White is shy and outcast 17-year old girl who is sheltered by her domineering, religious mother, and unleashes her telekinetic powers after being humiliated by her classmates for the last time at her senior prom.
Serene sleep or scared s**tless?: My own debs was probably scarier than the last 30 minutes of this film. On second thoughts...

If this isn't enough of a terrifying treat for you then I suggest taking a look at some of these 13 essential horror titles from the last decade.

popular
PICS: The man with the biggest penis in the world has one unbelievable problem with it
The JOE Friday Pub Quiz: Week 265
The 50 most iconic songs of all time* have been revealed
A scene by scene analysis of the most uncomfortable moment in Come Dine With Me history
Ryanair is seeking applicants for "the worst job in Ireland"
Warning after person has bank account cleared out hours after scam text
People born in April are officially the sexiest, study finds
You may also like
2 days ago
5 of the best 2021 movies and shows on Disney+ you might have missed
3 days ago
20 years ago this week we got cinema's best jump-scare of all time
3 days ago
"We've all lost people": Jamie Lee Curtis on Ellen Ripley, Sarah Connor and her iconic Laurie Strode
4 days ago
Jamie Lee Curtis announces plans for 2022 Halloween movie festival in Ireland
4 days ago
Halloween Kills review: One of the most violent horror movies Hollywood has made in years
5 days ago
25 years since its release, here are 25 things you didn't know about the movie Michael Collins
Next Page