A thrilling new kidnap drama kicks off on RTÉ2 tonight

Get ready for your new TV addiction.

For whatever reason, certain parts of Europe - especially up around Scandinavian way - are having a real moment right now with their crime dramas.

Think of the likes of The Bridge, or The Returned, or The Killing. For whatever reason, the chilly climes just seem to be natural breeding grounds for addictive thrillers, and it looks like Below The Surface will be the latest addition to that list of fantastic shows. 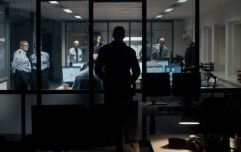 END_OF_DOCUMENT_TOKEN_TO_BE_REPLACED

Here is the official synopsis:

On a rainy October morning, fifteen Danes have their lives turned upside down when the metro train they are travelling on is hijacked by unknown perpetrators, who will threaten to kill each of them, one by one, if their demands aren't met. This is the beginning of a historic hostage situation that, over the course of one single week, changes Denmark forever.

The official Denmark finds itself caught in a whirlwind. The politicians argue whether or not to negotiate with terrorists. In the press, there are discussions on where the line is drawn in portraying the captives and seeking out their families.

Ordinary Danes are thinking that it could just as well have been them. Among the hostages, the thoughts vary between rebellion, negotiation and apathy, but one thought is shared by all: "Am I going to die now?"

The first of the show's eight episodes will air on RTÉ2 tonight at 9.30pm, so you will have to choose between it and both The Late Late Show and The Graham Norton Show, so you'd best be setting your DVR to record at least one of them so you can catch up with them again afterwards.

popular
"Genius" Irish woman pretends to work in Penneys to shop without appointment
Australian woman stuck with Irish accent after tonsil surgery
QUIZ: How many of these characters from The Simpsons can you name?
Two children, aged 3 and 4, hospitalised after consuming suspected cannabis jellies
Assassin's Creed director on why Ireland is the perfect setting for their new game
Alastair Campbell accidentally announces death of The Queen live on GMB
9-year-old boy killed by lightning strike while playing football
You may also like
3 years ago
Fans of Gone Girl and Big Little Lies should be very excited by this upcoming mystery thriller
3 years ago
Unsane is to the #MeToo movement what Get Out was to #BlackLivesMatter
3 years ago
Netflix's newest thriller appears to be about ... killer rain?
3 years ago
The creator of Luther has a new sci-fi thriller premiering on TV tonight
3 years ago
#TRAILERCHEST: Netflix have created their own version of Fargo with comedy-thriller Shimmer Lake
4 years ago
Netflix's new mystery thriller series 13 Reasons Why premieres this Friday
Next Page