#TRAILERCHEST: We finally get to see where Diana Prince comes from in the new kick-ass Wonder Woman trailer

"She must never know the truth about what she is."

Welcome to #TrailerChest, where we're taking a sneak peek at the brand new trailer for Wonder Woman. 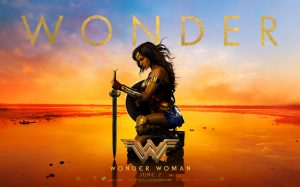 END_OF_DOCUMENT_TOKEN_TO_BE_REPLACED

Can you believe that this is the first female lead comic book movie since they all started getting their groove back with X-Men seventeen years ago? (The first person to say "Elektra" can leave right this second...)

Gadot plays the Amazonian princess, who is forced to leave her home in order to save mankind from itself in the middle of World War II. Pine plays the very-much-not-superpowered love interest, and the whole thing has echoes of that first Captain America movie, with the period setting bringing us up to date with everything else that's happened so far, i.e. Man Of Steel and Batman V Superman (in which Miss Woman first appeared), before they all reunite for Justice League this November.

It looks like Warner Bros. have successfully nailed the tone here, plus we'll get to hear that awesome guitar riff theme again!

popular
Clint Eastwood's final western is among the movies on TV tonight
The Toy Show DJ brothers have been offered their very first gig
The 50 most iconic songs of all time* have been revealed
The JOE Friday Pub Quiz: Week 271
Ryanair's "virtue signalling" claims are indicative of Ireland's view on the Irish language
PCR tests to be required for all international arrivals to the UK
One of the most shocking corporate documentaries ever made is available to watch this weekend
You may also like
2 days ago
Who tweeted it: Simu Liu or Rahul Kohli?
2 days ago
Warner Brothers reveals official detailed plot synopsis for The Batman
4 days ago
WATCH: A five-minute prologue for Jurassic World: Dominion has been released online
4 days ago
House of Gucci has the best sex scene from a big Hollywood movie in years
5 days ago
How Toy Story and Planet of the Apes influenced Arnie's bonkers Christmas movie
5 days ago
The 10 must-watch new (and old) arrivals on Disney+ this December
Next Page