#TRAILERCHEST: New trailer for Deadpool 2 goes in hard (heh heh) on the action

Welcome to #TRAILERCHEST, and join us as we take our first look at the latest trailer for Deadpool 2. 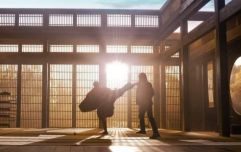 WATCH: The full trailer for The Matrix Resurrections is here to blow your socks off

END_OF_DOCUMENT_TOKEN_TO_BE_REPLACED

This is the plot to the movie, according to Mister Reynolds himself:

After surviving a near fatal bovine attack, a disfigured cafeteria chef (Wade Wilson) struggles to fulfill his dream of becoming Mayberry’s hottest bartender while also learning to cope with his lost sense of taste. Searching to regain his spice for life, as well as a flux capacitor, Wade must battle ninjas, the yakuza, and a pack of sexually aggressive canines, as he journeys around the world to discover the importance of family, friendship, and flavor – finding a new taste for adventure and earning the coveted coffee mug title of World’s Best Lover.

While they're being pretty hush hush about the actual plot of the movie itself (unless the above proves to be accurate, in which case... amazing), but whatever it is, it involves the time-travelling half-mutant half-cyborg Cable (Josh Brolin), and it probably figures into the end of the world as we know it.

There are so many great bits in here that it is hard to pick our favourite, but an obvious highlight is Deadpool playing with a Toy Deadpool, and pretending he is actually Woody from Toy Story ("Reach for the skyyyyyyyy!"), before diving crotch first at Cable's face.

We are totally on board for this.

By the way, you'll notice we're calling it Deadpool 2, but it doesn't actually have an official title yet. Don't be surprised if it ends up with some dirty pun title that has something to do with penises by the time it actually arrives in your local cinema.

The Big Reviewski || JOE · The Big Reviewski with Y: The Last Man, that Malignant ending & a secret streaming service
popular
Seven people hospitalised after huge fight at Tuam cemetery
One of the most-anticipated movies of the last few years is finally available to watch at home this week
Retail billionaire calls on unvaccinated people to be banned from shopping centres
There's some lovely weather in store this weekend, but better make the most of it
Government announces special €1,860 payment for laid-off workers during pandemic
It looks like Garth Brooks will play FIVE nights in Ireland after all
Simon Harris and wife welcome arrival of new baby boy
You may also like
3 weeks ago
WATCH: American trailer for new Irish drama series Kin is epic and action-packed
3 weeks ago
Three of the biggest theories from that Spider-Man: No Way Home trailer
1 month ago
WATCH: The final trailer for Eternals reveals the huge ramifications from Avengers Endgame
1 month ago
WATCH: First look at cast of new series about Bill Clinton-Monica Lewinsky scandal
1 month ago
Five great new trailers you might have missed this week
5 days ago
Logan swears to go "full f*****g beast" in new look at Succession season 3
Next Page