#TRAILERCHEST: It's time to take the mickey out of Hitler in Taika Waititi's WW2 satire Jojo Rabbit

The director of What We Do In The Shadows, Hunt for The Wilderpeople, and Thor: Ragnarok is back.

In some ways, Taika Waititi is a bit of a mystery because he has played the most lovable character in the MCU - that's Korg in case you're wondering - but in his new anti-war satire Jojo Rabbit, he's playing a c**t.

Now, before you report us for the use of bad language, that's exactly what the gifted director said when he was asked about conducting research for the role of Adolf Hitler.

END_OF_DOCUMENT_TOKEN_TO_BE_REPLACED

None was done “because he was such a fucking c**t, and everyone knows that as well. I think people have got to relate to really enjoy the ride,” said Waititi.

Well, after directing the funniest movie in the MCU and signing on for Thor: Love and Thunder, the New Zealand director is changing genres for his next film.

Aside from directing, Waititi is also starring as Hitler and after looking at his acting CV, it becomes clear he's also a decent thespian

Who else can say they've played a deadbeat dad, dandy vampire, crazy priest, alien that's made of rocks - but don't let that intimidate you - and Hitler?

In a word, eclectic.

Plot's it all about?: Lonely German boy Jojo"Rabbit" Betzler  has his world view turned upside down when he discovers that his single mother Rosie is hiding a young Jewish girl in their attic. Aided only by his idiotic imaginary friend, Adolf Hitler, Jojo must confront his blind nationalism. 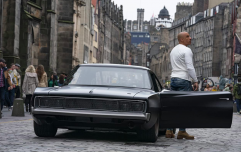 END_OF_DOCUMENT_TOKEN_TO_BE_REPLACED

Irish release date: At present, the film is scheduled to be released in Ireland on 3 January, 2020.