Jordan Peele has been on somewhat of a tear recently.

He won an Oscar in his directorial debut for Get Out, and his brand-new movie Us is going down an absolute treat with audiences, becoming the biggest ever opening box office for an original horror movie. 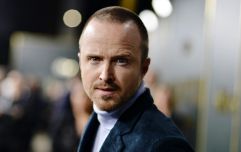 END_OF_DOCUMENT_TOKEN_TO_BE_REPLACED

So basically, he knows what he's at.

And now, he's the host of the reboot of The Twilight Zone, and it looks like this is going to be brilliant too.

In the latest trailer for the new series that has been released by CBS, we get a look at what appears to be snippets from several different episodes.

We see some famous faces throughout the trailer, including Adam Scott, Sanaa Lathan, Greg Kinnear, Marika Sila and Steven Yeun.

END_OF_DOCUMENT_TOKEN_TO_BE_REPLACED

Although it definitely does like extremely similar to the Netflix hit Black Mirror, Jordan Peele has explained the one biggest difference between the two shows.

He said: "One of the easy rules that we made for ourselves is that we don’t have to explore technology—Twilight Zone covers everything else the imagination can think of."

The first episode of The Twilight Zone will air to American audiences on 1 April.

popular
The Last Of Us Episode Five will premiere days earlier in Ireland and UK
One of the most underrated crime thrillers of recent years is among the movies on TV tonight
Amazon Prime Video has just added 21 big movies to its library
5 years ago, Hollywood took a massive gamble on a huge sequel... and lost big time
Shock as blues singer beats Adele, Beyonce and Taylor Swift to win Song of the Year Grammy
Ben Affleck's bored expression at the Grammys becomes a meme
The first reviews for Hogwarts Legacy are absolutely stellar
You may also like
7 months ago
Amazon's scary new feature offers a chilling vision of the future
2 years ago
WATCH: Black Mirror episode 'Death to 2020' coming to Netflix soon
2 years ago
QUIZ: Can you recognise the Black Mirror episode from the still image?
2 years ago
Black Mirror creator says the world currently doesn't have the stomach for new episodes
3 years ago
The Miley Cyrus episode of Black Mirror is getting some very positive reviews
3 years ago
Miley Cyrus reveals extra details about her episode of Black Mirror
Next Page