An interesting look behind one of the most talked about albums of the year.

There has been a lot of talk about U2 in the last few weeks and months, in the lead-up to the release of their latest album, Songs Of Experience.

The record, which follows up the forced-upon-our-iPhones release Songs Of Innocence, received some of the worst reviews of the band's career, even if JOE writer Eric Lalor did really enjoy it.

END_OF_DOCUMENT_TOKEN_TO_BE_REPLACED

We've yet to figure it in to where it might land on the league of their albums over all - we ranked them all from worst  to best right here - but we are interested to hear what the band have to say about it themselves.

Bono, The Edge, Larry and the other one will appear on the latest episode of the BBC documentary performance and interview series, which previously featured Adele, Sam Smith, Harry Styles and Michael Buble.

Talking to Music Week, the show's producer Guy Freeman had the following to say about the popularity of the series:

"It's [features an act that] perhaps hasn't been on TV a great amount in the recent past, so there's a degree of they feel slightly unattainable. They have got to be standout performers and they've got to believe that they are comfortable in that kind of environment." 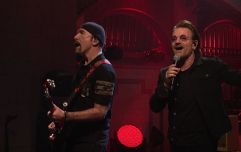 WATCH: U2 get theatrical as they bring Songs of Experience to Saturday Night Live

END_OF_DOCUMENT_TOKEN_TO_BE_REPLACED

"U2's a really interesting case in point - when have U2 ever, ever sat down to make a 60-minute TV show? Many artists don't really go into that world, they're used to TV a coming in to their world of stadium tours. It's not often that you can get them to almost scale themselves down to come into TV world."

Tonight's episode will feature the band performs some of their biggest hits at Abbey Road Studios, alongside new tracks from their latest album, and they will also be chatting to Cat Deeley about their lives and give her a backstage tour as they prepare to perform at the Morumbi stadium in Sao Paulo, Brazil in November 2017.

popular
Woman dies from hypothermia after telling doctor she 'couldn't afford heating'
An incredibly fun action blockbuster is among the movies on TV tonight
Here is a list of every Bank Holiday in Ireland in 2023
Nicola Bulley's phone found by the river 'could be a decoy', diving expert suggests
QUIZ: We bet you can't get full marks in this extremely frustrating geography quiz
The Last Of Us Episode Five will premiere days earlier in Ireland and UK
One of the best crime thrillers ever is among the movies on TV tonight
You may also like
3 weeks ago
All 40 tracks that will be included on U2's new album, Songs of Surrender
2 months ago
U2 drummer Larry Mullen Jr. says band may perform without him in 2023
4 months ago
Would you pay over €60 to hear Bono read from his book? Now you can!
5 months ago
"I saw grown men crying!" – Arcade Fire's legendary Irish live debut revisited
6 months ago
U2 to take up residency in new $1.8 billion Las Vegas arena
6 months ago
The JOE Music Quiz: Week 114
Next Page