VIDEO: Breaking Bad's Mike gives no fecks and drops the F-bomb in this great interview

Not a single f**k is given

Fans of Breaking Bad and Better Call Saul will know that Mike Ehrmantraut is definitely someone that you don't mess with.

Gus Frings' former right-hand man is arguably one of the best characters in both of Vince Gilligan's shows and it seems that the man who plays him, Jonathan Banks, doesn't differ too much from his most famous character. 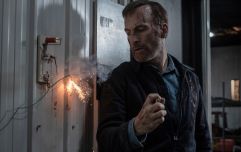 EXCLUSIVE: Bob Odenkirk on the one dangerous stunt he DIDN'T do in new action movie Nobody

END_OF_DOCUMENT_TOKEN_TO_BE_REPLACED

Banks was nominated for an Emmy in the Outstanding Supporting Actor in a Drama Series, losing out to Peter Dinklage in Game of Thrones, but he definitely delivered the best speech of the night with this zero bullshit commentary on just how hot it was at the ceremony.

The Big Reviewski || JOE · The Big Reviewski with Y: The Last Man, that Malignant ending & a secret streaming service
popular
One of the most-anticipated movies of the last few years is finally available to watch at home this week
Gardaí warn of scam involving "inappropriate or sexual images" after young boy blackmailed for money
TG4 to air documentary about the Irish woman who shot Mussolini tonight
The film that predicted the pandemic is among the movies on TV tonight
Body of woman found by walker on shoreline in Galway town
QUIZ: Can you get 10 out of 10 in the ultimate Ed Sheeran lyrics quiz?
Government announces special €1,860 payment for laid-off workers during pandemic
You may also like
1 year ago
New Better Call Saul trailer shows the return of Breaking Bad's most beloved character
1 year ago
Season 5 of Better Call Saul will see the return of two beloved Breaking Bad characters
1 year ago
El Camino gives Breaking Bad fans closure, but it's a mostly pointless detour
1 year ago
Acclaimed actor Robert Forster has died, aged 78
1 year ago
Breaking Bad creator Vince Gilligan has finally answered the big Walter White question
1 year ago
Aaron Paul answers some of the big questions ahead of the release of El Camino
Next Page