Video: Check out the gripping trailer for the ‘The Summit’

Irish director Nick Ryan’s award-winning film The Summit will open in Irish cinemas on 22nd November and judging by the trailer it’s going to be intense.

The Summit chronicles one of the deadliest days in modern mountain history when 11 climbers, including Limerick man Ger McDonnell, lost their lives on the most dangerous mountain on Earth, K2. The film is from the producers of BAFTA winning Touching The Void, and the writer of Oscar winning The Cove.

END_OF_DOCUMENT_TOKEN_TO_BE_REPLACED

Speaking about the release Nick Ryan, director of The Summit said: “We are truly excited to be bringing The Summit to the big screen in Ireland, and that audiences will be able to experience the events of the shocking 2008 climb.

“This is a compelling story and one that we felt needed to be told, especially with the story of Irishman Ger McDonnell, whose final heroic act is central to the film.

“It was an honour to receive an award at this years Sundance film festival, and following our release across the US this weekend, this news is great for all those who worked so hard to bring this film to the screen.”

The Summit includes never-before-seen footage of the climb and interviews with Sherpa Pemba Gyalje, who was awarded the National Geographic Adventurer of the Year for his heroic deeds on K2; Norit team leader Wilco van Rooijen, who survived three days in the death zone; and Marco Confortola, the last man to speak to Ger McDonnell. 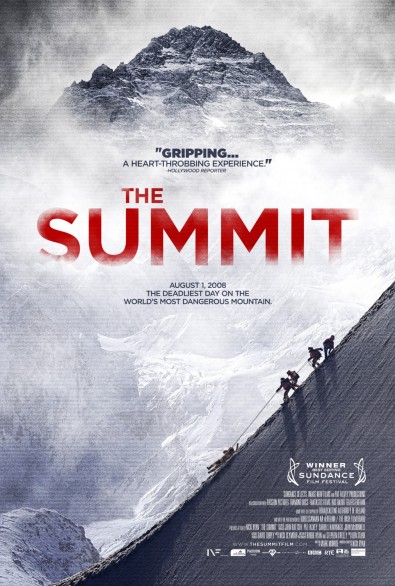