What are you worth?

What happens when you take a dash of Love/Hate, a pinch of Game Of Thrones and throw in a sprinkling of Fight Club and the global economic crash?

Well, a really terrible-tasting cake probably and an even worse analogy for new Irish thriller, Traders. 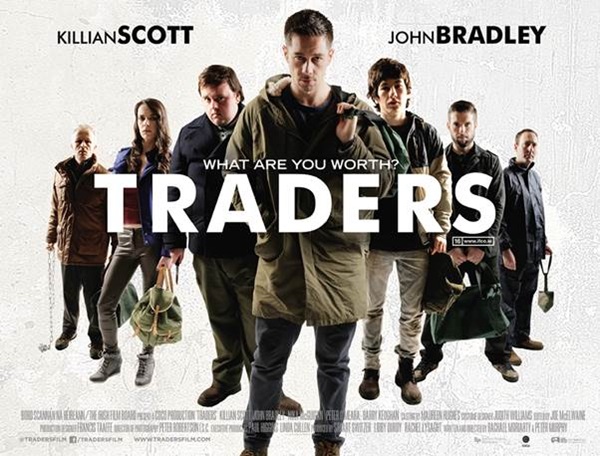 END_OF_DOCUMENT_TOKEN_TO_BE_REPLACED

This new Irish film tells the story of Harry Fox (Scott), a young Dublin-based businessman who seems to have it all; the luxury apartment, the fancy car, the ridiculously-chiselled abs.

When the company he works for goes bust, however, it looks like he will lose everything.

Step forward Vernon Stynes (Bradley), a colleague offering a solution through his diabolical, all-or-nothing scheme based in the Deep Web, called Trading; two strangers empty their banks accounts, sell their assets, put their entire worth in cash into a green sports bag.

They travel to a remote location and fight to the death. Winner buries the loser and walks away twice as rich.

END_OF_DOCUMENT_TOKEN_TO_BE_REPLACED

Vernon believes trading is a no-brainer for anyone who wants to get rich quick. Can Harry resist the lure of a such a high risk gamble?

It’s dangerous, it’s illegal, but it could solve all his problems.

We caught up with the much more law-abiding Killian and John to find out who would win in a fight in real life, we see how well they know their Westeros and West Dublin geography, and watch out for the moment where things get pretty dark, pretty quickly.

Here's the Traders trailer to get you in the mood...

popular
Amazon Prime Video has quietly added 18 big releases to its library
Here's where all the 149 tickets that won €36,687 in Saturday's Lotto were sold
Man arrested on suspicion of the murder of Ashling Murphy
Moon Knight could be leading directly into Marvel's scary version of the Avengers
New HBO comedy series looks like a must watch for Flight of the Conchords fans
Euphoria fans delighted after learning Fezco's Irish connection
Confirmation on lifting of restrictions for pubs and events expected this week
You may also like
2 months ago
WATCH: The first 15 minutes of George R.R. Martin's video game are going to blow your mind
2 months ago
The 100 greatest TV shows of the 21st century have been revealed
3 months ago
WATCH: The first Game of Thrones prequel trailer promises fire and blood
3 months ago
Game Of Thrones director on why there probably shouldn't be a Game Of Thrones movie
4 months ago
WATCH: The Wheel of Time series looks to beat Lord of the Rings to the punch
5 months ago
Michael Fry to star alongside big names from Game of Thrones and Derry Girls in TV adaptation of Graham Norton novel
Next Page