Llewellyn is given the task by Mason to call each of the girls and strike up a conversation. However, his conversation must use words starting with the letters of the alphabet, in chronological order. 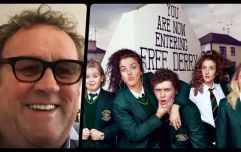 END_OF_DOCUMENT_TOKEN_TO_BE_REPLACED

What could potentially be deemed an easy task riddles the actor with guilt, as he realises that all of his co-stars are unwell.

First up he calls Jamie-Lee O'Donnell, who plays his cousin Michelle, and only manages to get through half of the alphabet before confessing.

"Not gonna lie, I actually thought you were on speed or something, or having a meltdown," Jamie-Lee tells him.

His attempt is slightly better this time around, but upon finding out that she too is ill – he begins to panic yet again, prompting his co-star to ask him: "Are you drunk?"

Check out the video below to see how he fared.

House of Rugby Ireland · Quinn Roux on finding a home in Ireland and Mike McCarthy brings the absolute HEAT!
popular
RTÉ Prime Time footage shows tanned Irish holidaymakers returning from Lanzarote
Bill Gates hits back at "crazy" and "evil" conspiracy theories posted about him on social media
QUIZ: Can you name all of these countries just from one of their cities?
Taoiseach Micheál Martin says people need to stop going on holidays
Holly Willoughby criticises influencer for travelling to Dubai during pandemic
QUIZ: Do you know the collective name for these groups of animals?
Leo Varadkar rules out going straight to Level 3 restrictions in March
You may also like
5 months ago
An official Derry Girls book is coming out this year
6 months ago
It looks like a Derry Girls movie is indeed on the way, according to creator Lisa McGee
7 months ago
Chernobyl leads this year's BAFTA nominations, Derry Girls up for best comedy
8 months ago
QUIZ: Can you beat this Derry Girls expert's score on Mastermind?
11 months ago
Derry hotel launches a Derry Girls walking tour and menu
11 months ago
QUIZ: How many of these Derry Girls characters can you name?
Next Page