The problem - or perhaps, some would argue, the power - with comedy is that it requires people to be constantly pushing boundaries with what they can and can't make fun of.

If everyone remained within a pre-defined standard set of taste and remaining inoffensive, some of the greatest comedians in the world would've found their wings clipped before they even began. 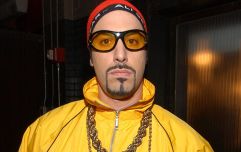 END_OF_DOCUMENT_TOKEN_TO_BE_REPLACED

With that in mind, considering how fresh the wound is with the whole Harvey Weinstein case, does Larry David making jokes about it go too far?

Admittedly, unlike the James Corden routine from a few weeks back, David doesn't make fun of Harvey or the situation itself, but deflects aim to the fact that it is painting the Jewish community in a bad light.

However, from that point on, he ricochets into making several jokes about dating while in a concentration camp, and the once-laughter filled audience quickly recedes into near-silence once they realise what direction David is taking this routine.

The same was the same online, when the overwhelming Twitter reaction (which you can see here) were unimpressed with the comedian's line of jokes.

So what do you think? Should David be allowed to make jokes about everything and anything? Or are there some topics that should be kept off the table, either in the short term (like Weinstein) or permanently (like the Holocaust)?

The Big Reviewski || JOE · The Big Reviewski with Ray Liotta, Goodfellas facts & Tom Hanks making us cry
popular
Four major employers join forces to create Ireland’s first remote working alliance
Netflix has just added arguably the very worst movie of the last decade
Up to 90% of petrol stations in the UK have run dry
Here’s what graduates from Irish colleges can expect to earn in the workplace
Legendary metal band Tool announce first Irish show in over 15 years
Plans for new bank holiday now at an "advanced stage"
QUIZ: How well do you know the Daniel Craig era of James Bond?
You may also like
1 month ago
Why improv comedy is the exact night out we all need right now
3 months ago
Mrs Brown's Boys chat show cancelled this year due to Covid
8 months ago
20 of the best comedies to watch on Netflix right now
11 months ago
RTÉ issues callout for people with the “most horrible, most embarrassing stories” for new comedy series
1 year ago
QUIZ: Name the obscure characters from The Simpsons (Part Two)
1 year ago
Sarah Cooper, the viral Trump impersonator, is getting her own Netflix special
Next Page