It was a proud moment for the town of Dundalk on last night's episode of Jimmy Kimmel Live, which was guest hosted by actor Chris Pratt.

Actress Margot Robbie was on the couch to promote her upcoming movie I, Tonya when she revealed to Pratt that she'd started working at a bar at the age of 14 and loved to drink beer.

Pratt called for a few beers to be brought to the desk, and the Suicide Squad starlet showed off her party trick of opening one bottle of beer with another. 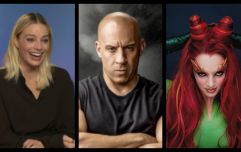 END_OF_DOCUMENT_TOKEN_TO_BE_REPLACED

She then proceeded to drink the beer and checked the label, presumably not particularly well-acquainted with the Irish beer.

Harp was created and subsequently brewed in Guinness' Great Northern Brewery in Dundalk for years. It's now produced in the company's famous Dublin brewery.

House of Rugby Ireland · Quinn Roux on finding a home in Ireland and Mike McCarthy brings the absolute HEAT!
popular
Snow and ice warning issued for seven counties
Xbox reveals full list of exclusive games arriving in 2021
The 50 most iconic songs of all time* have been revealed
11 arrested at planned protest at the Four Courts
Josepha Madigan apologises for comparisons between reopening of schools and Mother and Baby Homes
Three men arrested following search of "chop shop" in Meath
20 of the best Irish movies you can watch at home right now
You may also like
11 months ago
Margot Robbie on why she wants Poison Ivy in the next Harley Quinn movie
11 months ago
COMPETITION: Win tickets to Irish Premiere screening of new Margot Robbie movie, Birds Of Prey (And The Fantabulous Emancipation Of One Harley Quinn)
11 months ago
Here's the line-up for this week's Graham Norton show
1 year ago
WATCH: The first trailer for Birds of Prey, the new Harley Quinn movie, is here
1 year ago
Once Upon A Time In Hollywood is Quentin Tarantino's biggest hit in years
1 year ago
Margot Robbie reveals the stunts in new Harley Quinn movie Birds Of Prey are some of the best she's ever seen
Next Page