WATCH: The official Deadpool blooper reel is almost as funny as the film itself

"Is the mask muffling my voice?"

Released in February 2016, Deadpool was an instant hit. It grossed over €700 million ($783 million) worldwide, an impressive profit compared to the €51 million ($58 million) budget the film was made on.

Fans of Deadpool were delighted to hear that filming of a second movie in the franchise would begin in the middle of June, although the film itself would not hit our screens until June 2018. 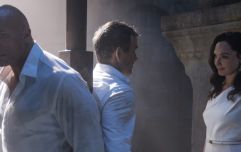 WATCH: The first trailer for Red Notice is here, Netflix's biggest ever movie

END_OF_DOCUMENT_TOKEN_TO_BE_REPLACED

In the meantime, it's always worth rewatching the brilliant, fourth wall-breaking original.

This official blooper reel was released alongside the movie on Blu-ray and has made its way to the internet racking up over 500,000 views in four days.

You won't find a better way to spend six minutes and 33 seconds today, we can promise you.

The Big Reviewski || JOE · The Big Reviewski with Andy Serkis, Squid Game follow-ups & the return of Succession
popular
New €140 million road officially opens today, replacing one of the Ireland's most dangerous roads
Expert wants 10 antigen tests delivered each week to every family this winter
QUIZ: Can you master this General Knowledge Quiz?
The JOE Movie Quiz: Week 124
The cleanest towns in Ireland have been named
QUIZ: Get your quiz on with this General Knowledge Quiz
The JOE Friday Pub Quiz: Week 265
You may also like
2 months ago
Free Guy features a huge Hollywood star we haven't seen on the big screen in YEARS
2 months ago
Oscar-nominated director gives intriguing one-word answer to Deadpool 3 rumour
2 months ago
Free Guy review: The most enjoyable blockbuster of the summer
3 months ago
Netflix announces release date for Red Notice, their most expensive movie to date
4 months ago
Ryan Reynolds and Rob McElhenney share brilliant teaser of new documentary about buying Wrexham
6 months ago
WATCH: Hitman's Wife's Bodyguard is exactly the kind of fun movie we all need right now
Next Page