It's less than a week until the gang returns.

Hey-oooo! Much like the gang whenever they get excited about Thunder Gun Express, a game of CharDee MacDennis, or a slice of rum ham, our excitement levels are through the roof ahead of the return of It's Always Sunny in Philadelphia for a 14th season on 25 September.

That's right jabronis, we're going back to Philadelphia for more episodes that are so depraved that even Gail the Snail would blush.

END_OF_DOCUMENT_TOKEN_TO_BE_REPLACED

After the first trailer was released, FX have been dropping a few more teasers and two of them contain some absolutely cracking gags.

We all know and love the gruesome twosome - that's Charlie and Frank for any bozos that don't know - because their living arrangement is unlike anything else on TV.

As Frank so elegantly said: "I love eggs, Charlie. And I love crabs. And I love boiling denim and banging whores. And I don't care if anyone doesn't like that about me, they don't have to stick around."

The man is a poet.

Well, it appears that Frank and Charlie might be getting a new roommate and the ad that they've taken out is pure genius.

We wonder if this new roommate knows that the only correct way of falling asleep is by huffing some glue and then eating cat food? 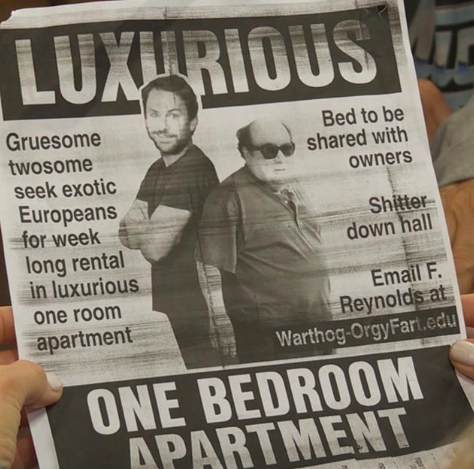 END_OF_DOCUMENT_TOKEN_TO_BE_REPLACED

Frank might be on the lookout for "bohemians with no sexual boundaries" but the rest of the gang are still stuck in their ways when it comes to finding somebody to date.

How do you truly get to know someone?

Charlie thinks you should go through their trash, Dee reckons that sleeping with them is the best way, and as for Mac, well, he's just a whole different story!

Season 14 of Always Sunny premieres in the US on 25 September and as usual, we expect it to arrive on Netflix in the following weeks.

Take a look at the carnage that's in store.

Wanna share a bed with Frank and Charlie? Make your case 👇#SunnyFXX pic.twitter.com/yAdoXj331U

popular
The JOE Movie Quiz: Week 102
Ryanair set to take first delivery of "Gamechanger" aircraft this month
The 50 most iconic songs of all time* have been revealed
QUIZ: How many of these characters from The Simpsons can you name?
International travel won't resume until August "at the earliest", says Leo Varadkar
Leo Varadkar says cyber attack on Department of Health was "unsuccessful"
QUIZ: Name the EU Capital cities containing the letter 'R'
You may also like
6 days ago
NBC refuses to air 2022 Golden Globes over lack of diversity within Hollywood Foreign Press Association
1 week ago
New RTÉ series to celebrate The Commitments, The Snapper and The Van 30 years on
2 weeks ago
QUIZ: How well do you know Ted Hastings' one-liners from Line of Duty?
2 weeks ago
Line of Duty's Martin Compston says Sunday's episode could be the last ever
2 weeks ago
Each Line of Duty copper ranked by their likelihood of being H
2 weeks ago
Netflix’s new true crime documentary could be your next TV obsession
Next Page