WATCH: Tom Cruise is defying death once more in the full trailer for Top Gun Maverick

33 years since the original Top Gun, Tom Cruise doesn't have a hair out of place reprising his old role of Pete 'Maverick' Mitchell in the trailer for Top Gun Maverick.

The trailer pretty much confirms that the film will be visually stunning and maintain pretty much an identical aura to its predecessor. Even Miles Teller's character, the son of Maverick's dead pal Goose, looks exactly like his father did in the original film. 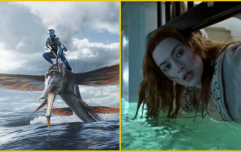 END_OF_DOCUMENT_TOKEN_TO_BE_REPLACED

Plot-wise, Tom Cruise seems to have been called back to the Air Force in order to teach a new crop of aviators how to do reckless things in the sky.

Knowing that Cruise insists on doing pretty much all his stunts, or at least the ones that are humanly possible, makes the crazy stuff going on below even more exciting.

We suspect that fans of the original are going to like what they see:

No official release date has been set for the movie yet, but we know that it's coming some time during Summer 2020.