A show about a pandemic might not be what you want to watch right now, but stick with us...

One thing is for damn sure, this pandemic show can't be accused of hopping on the bandwagon.

Based on a comic book series that kicked off in 2002, Y: The Last Man was almost a movie fronted by Shia LaBeouf as far back as 2007, before Fox picked it up for a TV adaptation. It was originally to be big project for Barry Keoghan in 2018, before he too dropped out.

END_OF_DOCUMENT_TOKEN_TO_BE_REPLACED

Yes, a show about a killer disease might be the last thing any of us want to willingly watch right now, but thankfully this slick, polished adaptation isn't really about the killer virus, but the unique world it leaves behind.

One day, without warning, every living mammal with a Y-chromosome simultaneously dies... except for Yorick (Ben Schnetzer) and his pet monkey, Ampersand. It just so happens that Yorick is the son of Senator Jennifer Brown (Diane Lane), who finds herself suddenly promoted to President of the United Stated when every other man above her in the pecking order drops dead.

We are also introduced to a host of other characters, including Yorick's sister Hero (Olivia Thirlby), a paramedic having an affair with a married man. Kimberley Cunningham (Amber Tamblyn), meanwhile, is a staunch Republican who doesn't believe America can be run successfully without men, and Agent 355 (Ashley Romans), is a secretive agent who has been tasked with defending the new President and her extended family.

But from the three episodes that were made available to critics ahead of the show's release, this is less about individuals and more about how the world would react to no more men, like a global Bechdel Test suddenly put into action. And it turns out that it is likely the levels of fear, violence and subterfuge will remain pretty much the same... 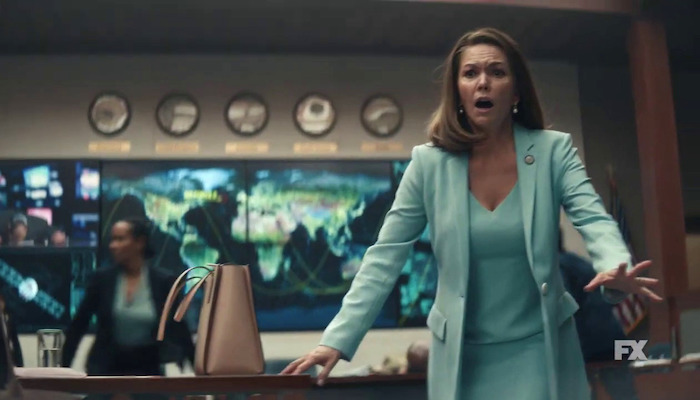 END_OF_DOCUMENT_TOKEN_TO_BE_REPLACED

There have been some important updates to the story since it was originally published in 2002, with focus also given to the trans community and how trans men - being viewed as men by the population - are now forced to "come out" to literally every person who might not have looked twice at them before.

Additionally, the Democratic/Republic divide feels more entrenched than ever, especially as America is still very much under the show of its 45th President. It gives the performers some rich, layered characters to really dig their teeth into, especially Diane Lane, who - despite starring in some huge movies and getting an Oscar nomination - really feels like an actress that never truly got the opportunity to show the true depth of her talents.

Through those first episodes, all of which were slickly directed and intelligently scripted by an all-female team of writers, directors and showrunners, the vibe is very much House Of Cards meets The Leftovers. But with a monkey in it. And truth be told, Schnetzer's character truly feels like an odd one out. Maybe that is on purpose, considering the premise, but his snarky one-liners bump hard against the catastrophe that everyone else in the show is reacting to.

END_OF_DOCUMENT_TOKEN_TO_BE_REPLACED

The show has yet to show any real interest in the mystery behind the sudden deaths (and maybe it never will), but if it continues down this very interesting path of how a world would respond to global devastation like this, then we'll still be completely hooked.

The first three episodes of Y: The Last Man will be available on Disney+ from Wednesday, 22 September, with the rest of the season arriving weekly each Wednesday after that.

popular
The JOE Friday Pub Quiz: Week 307
Anne Heche dies one week after car crash, aged 53
Record for hottest August day in Ireland ever has now been broken
An exciting Irish crime thriller is among the movies on TV tonight
WATCH: Flight makes scary 'lowest ever landing' at Greek airport, narrowly avoiding plane spotters
A great underseen action thriller is among the movies on TV tonight
Shooting stars set to light up Ireland's skies this weekend
You may also like
2 days ago
WATCH: House of Hammer details the alleged crimes of award-winning actor Armie Hammer
2 days ago
Prime Video has just added 25 very big movies to its library
3 days ago
5 must-watch shows and movies streaming on NOW in August
4 days ago
Two long-thought-dead Marvel projects appear to be in the works
1 week ago
This new true-life disaster show is being called one of the grimmest, bleakest shows ever made
1 week ago
All the new releases coming to Netflix, Prime Video, Disney+ and cinemas in August
Next Page