The ultimate "Did you see THIS BIT?" show.

We first reported on this show when it began to screen in the States, with all of the early reviews getting us very excited!

American viewers quickly got very addicted to You, but had to watch it on a week-by-week basis as the show was released on US TV over there in a normal, old-school way. 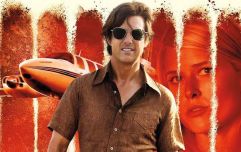 END_OF_DOCUMENT_TOKEN_TO_BE_REPLACED

We won't have that problem here though, as the show will be launched in its entirety on Netflix in the not-too-distant future.

In case you need a reminder, the show deals with a young bookstore manager named Joe (played by Gossip Girl and Easy A's Penn Badgley) who falls in love with a customer named Beck (played by relative newbie Elizabeth Lail).

It seems like a cute enough set-up, except that Joe quickly becomes a little too obsessed with Beck, mostly without her knowledge, and goes about to attempt to improve her life in every way he sees fit... by whatever means necessary.

All episodes of You will become available on Netflix from Wednesday 26 December.