Members of the public travelling to the festival reported massive traffic delays on social media.

AA Roadwatch has warned people travelling to the All Together Now festival in Waterford to expect delays on routes approaching the festival site at Curraghmore Estate due to massive traffic tailbacks in the area.

Significant numbers of people took to social media on Friday afternoon to complain about the delays getting to the festival, which runs from Friday to Monday and features acts such as The National, Patti Smith, Hot Chip and Orbital.

Complete standstill. We haven’t moved in almost 3 hours. Most people have now left the bus and are walking the 6km with their luggage. We haven’t seen a single Garda or steward. There’s no info

The same traffic I’ve been looking at for 2hrs 45mins in Carrick on Suir. Travelled a total of 1.6km. Ridiculous

Yards away from entrance, still stuck in the car, started queuing at 2pm. 3 whole hours ago!

END_OF_DOCUMENT_TOKEN_TO_BE_REPLACED

Speaking to JOE about the traffic situation shortly after 4pm on Friday, a spokesperson for AA Roadwatch said: “It is extremely heavy at the moment on the roads around Carrick-on-Suir, especially outside it on the Waterford side. There are very long queues towards the blue entrance from the Kilmeaden Road and Dungarvan Road.

“The advice to drivers is to expect delays and follow the official route to their entrance. They're advised not turn off onto back-roads, which are also congested, and not to put ‘Portlaw’ into their satnavs/apps as that won't bring you to the site and will result in a considerably long diversion.

“Gardaí are directing traffic in the area.”

Gardaí issued a traffic management plan ahead of the event (see below), which was circulated on the official festival account again on Friday afternoon. 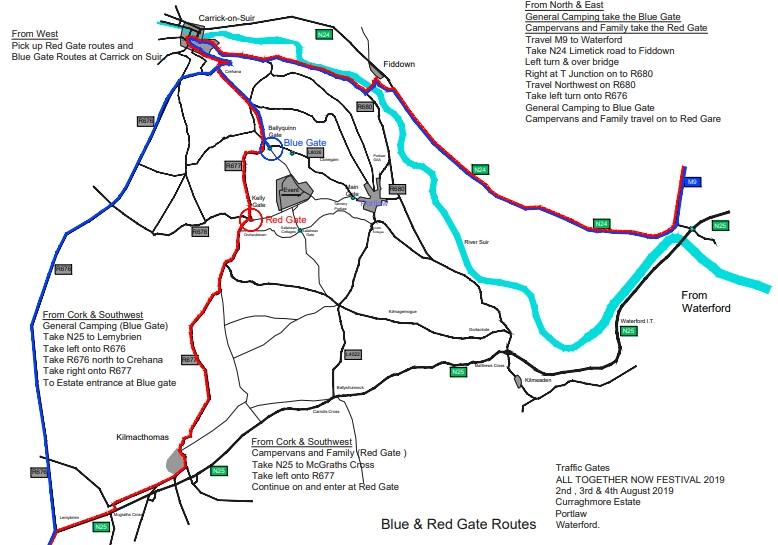 IMPORTANT TRAVEL INFO❗️
Please do not put Portlaw into your maps. Please follow the Garda Traffic Plan: https://t.co/9fngJqarhJ & go to the correct gate

While there have been no further updates on the traffic situation on the festival account at the time of writing, organisers did move to quell rumours that the festival would be cancelled because of the traffic problems.

Festival is going ahead, don't worry!