Pop's next big thing is having a moment.

The crowd. It screams.

It's quite deafening, really. Billie Eilish, the reason we've all packed into London's Shepherd's Bush Empire on a Monday night, is nowhere to be seen.

END_OF_DOCUMENT_TOKEN_TO_BE_REPLACED

Nick Grimshaw is, though. Upon taking his spot at the balcony, the BBC Radio 1 man is greeted with a hundred craned necks and sporadic, decibel-bothering cheers.

Brooklyn Beckham, in the company of brother Romeo and girlfriend Hana Cross, receives his own share of adulation when spotted.

It's a tabloid-friendly affair, but the real star is front and centre, emerging from the core of a giant mechanical spider - one that doesn't move, thankfully, but still sports a cluster of worrying eyes - that doubles as a neon-hued lighting fixture.

We're in the early chapters of Billie Eilish's story, yet there is already much to study.

Her one-year-apart interview with Vanity Fair, released one month before she turned the grand old age of 17 in December, remains an exceedingly compelling watch.

In it, Eilish reflects upon a star-making 12 months at an especially formative moment for any human.

END_OF_DOCUMENT_TOKEN_TO_BE_REPLACED

That 11-minute side-by-side life update also reveals how Eilish went from feeling no pressure to "handling it horribly" but mostly keeping it to herself, how entering into a relationship would be unfair on a partner, and how she almost caused a stampede by sneaking through the audience at a festival.

There's also this sage advice that relates to both a youthful fan base and a very modern problem faced by those growing up with social media as a constant:

Kind of puts the Leaving Cert into perspective, huh? 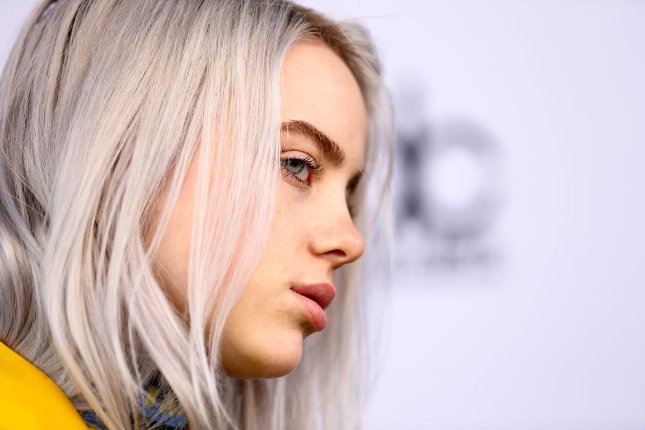 END_OF_DOCUMENT_TOKEN_TO_BE_REPLACED

Pronounced doom and gloom may be the aesthetic, but, outside looking in, it doesn't seem too bad being Billie Eilish right now.

Ordinary folk like you and I are never going to understand the rigours of touring, the tension of a creative process that must satisfy major commercial ends, the difficult cost of fame that leaves a 'normal' life in the dust.

Instead, we project. We demand. We live vicariously. In a vast media landscape that threatens to consume, we don't hang around for long, either.

There's a wonderful juxtaposition at play as Eilish kicks into gear, 'My Boy' announcing her arachnid emergence to a horde that reflexively raise phones as one in a scene so freakish that it resembles a sort of bitter propaganda screed.

The venue - a splice of Dublin's Olympia Theatre and Button Factory, respectively - is lined with hardcores who sport spiked collars and know every single word, aforementioned celebs and industry figures who loiter at the bar, offering commentary on their hugely important personal lives for those within earshot.

Noise is an interesting mix, as it happens. For the first handful of songs, the room is as loud as anything this writer has ever experienced in such a setting.

Though the gathered ultimately tire a touch, they manage to overpower Eilish many times over the course of her set. In turn, she directs the microphone their way.

Connection and communion extends to the appeal for mosh pits and doing the 'crouch down and jump up when I tell you' thing, but it's when the Los Angeles native asks that we all take a literal step back for a slow number - before things really kick off, she promises - that you realise you're witnessing someone in total control.

Eilish gets her audience because, for the vast majority, she is them. 'Bury a Friend' and its glam-rock pulse invites bounce, and you shake off any reservations of the gleeful high-pitch echo that accompanies the delivery of the "I wanna end me" lyric.

It's not weird, or troubling, any more than being a teenager is weird and troubling. Did you know yourself then? How about now?

Eilish deals in the rawest form of angst, cutting to the sometimes shattered heart of the matter via a combination of smart, sharp writing and a fearless, no-fucks-given performance to match.

Night one of three in London is a frenzied hourglass, captured through the prism of a couple of thousand Instagram stories and a general feel of disquiet.

Daily reminders of an impending apocalypse will probably provoke the need for real-time distraction, in fairness.

From the stage, the likes of 'Bellyache', 'You Should See Me in a Crown' and the brand new, destined-to-be-problematic 'Wish You Were Gay' should inspire tattoos, if they haven't already.

There's room for throwback nods, too.

Eilish's signature oversized t-shirt finds Kiefer Sutherland's Lost Boys vampire leader staring out, surveying a scene that often registers as darkly cinematic. In truth, she wouldn't be all that out of place on a Slipknot bill.

Every now and then, that screaming crowd loses itself. Some are shushed when Billie Eilish speaks with a cadence that manages to be giddy, brash and vaguely apathetic.

Others bear witness to the entire show through a box of light. Both hope and despair have a place in the room.

"This is the only moment we're going to get to be in this moment, ever," Eilish proclaims before richly devastating break-up anthem 'When The Party's Over' ushers in the final act.

"So, why don't we just be in this moment together?"