Tickets are on sale now.

Bon Jovi have added a second Irish date on their This House is not for Sale Tour that will take place next summer.

They'll be playing at the RDS in Dublin on Sunday June 16th, to go with their original date on the 15th. 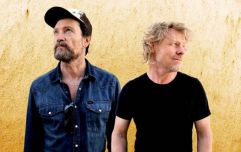 END_OF_DOCUMENT_TOKEN_TO_BE_REPLACED

The band will be supported by Manic Street Preachers on both nights, with tickets for the second concert on sale now via Ticketmaster.

Speaking about the upcoming tour, singer Jon Bon Jovi has said: "Those huge shows, tens of thousands of people all together as one, that’s what we do. We’ve become a new, rejuvenated Bon Jovi. A refreshed line up that kills every night.

"We sound better than ever and we’re enjoying every minute. We are out there as a band, feeding off each other and the fans, having the time of our lives all over again."

popular
Ryanair set to take first delivery of "Gamechanger" aircraft this month
Joe Rogan claims straight white men "won't be able to talk" if society gets any more "woke"
Over 25,000 sign petition for Government to scrap tax breaks for cuckoo funds and build public homes
Three people arrested in search operation targeting dissident republican activity in Cavan
The JOE Movie Quiz: Week 102
Huge number of businesses plan on employees returning to workplaces in September
Here are the restrictions being eased today as Ireland continues reopening
You may also like
2 days ago
The JOE Music Quiz: Week 57
1 week ago
JOE’s Song Of The Day #895 – Cian Ducrot feat. Cate 'Know Me Again'
1 week ago
The JOE Music Quiz: Week 56
1 week ago
Kildare set to play host to a socially distanced music festival this summer
2 weeks ago
JOE’s Song Of The Day #894 – J.F.O 'Amnesia'
2 weeks ago
The JOE Music Quiz: Week 55
Next Page