Would you consider making the trip?

Wireless Festival has announced its headliners for 2019 - and it is a pretty impressive line-up.

After playing the festival in 2018, Migos will be co-headlining alongside Cardi B on Friday July 5th. 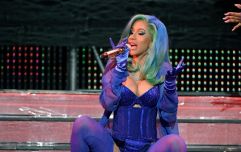 END_OF_DOCUMENT_TOKEN_TO_BE_REPLACED

The Saturday and Sunday night headliners are both UK festival exclusives - Travis Scott takes top billing on Saturday, and A$AP Rocky will then headline the closing night.

Another exclusive announced is Future, who will play before Travis Scott on Saturday.

The festival will be at London's Finsbury Park for the fifth year in a row, and run from July 5th to 7th. Individual day and full weekend tickets are now sold out, but two-tickets are still available as of writing.

Last year's Wireless was supposed to be headlined by J Cole, Stromzy and DJ Khaled - until Khaled mysteriously dropped out, and pictures of him on holiday appeared on social media. Drake eventually stepped in at the last minute, playing a short but well-received set.

popular
The JOE Music Quiz: Week 105
QUIZ: Can you name every county in Ireland containing the letter 'O'?
The JOE Friday Pub Quiz: Week 295
Three people injured after two-car crash in Dublin
Morgan Freeman has been banned from entering Russia
The 50 most iconic songs of all time* have been revealed
Late Late Viewers left in awe of Paul McGrath's memories of Jack Charlton
You may also like
2 years ago
WATCH: Cardi B interview Bernie Sanders about American politics in a nail salon
2 years ago
#TRAILERCHEST: J-Lo, Cardi B, and Lizzo are former strippers out for revenge in Hustlers
3 years ago
Cardi B is continuing to be the political commentator that America requires in its time of need
3 years ago
WATCH: Cardi B's take on the US government shutdown is both hilarious and spot on
3 years ago
The 10 Worst Songs of 2018
3 years ago
WATCH: Cardi B on James Corden's Carpool Karaoke is extremely entertaining
Next Page