KnockanStockan has gone from strength to strength in recent years.

Established in 2007, the indie festival has become a crowd favourite. It won the "Best Small Festival" award at the Irish Festival Awards 2008, and was shortlisted for the Irish Times - Ticket Festival Awards in 2012.

In recent years, lineups have continued getting bigger and better. Despite growing commercial appeal, the event has retained its friendly communal feel which has kept people coming back for more.

More importantly, it still takes place in its original scenic location. The festival grounds reside just minutes away from Wicklow's  beautiful Blessington Lakes. It's surrounded by the Wicklow mountains too- natural beauty on every side.

This year, there is an awesome line-up in store. From Emmet Kirwan to Mango X Mathman and The Eskies, there's bound to be something for everyone. There will even be storytelling and design taking place in new festival stages and areas.

Speaking of stages, Carlsberg Unfiltered is set to return as headline sponsor. To celebrate their Danish inspirations, the team will give an existing venue a Danish twist.

The main KnockanStockan bar 'The Danish Quarter' will be hosted by Carlsberg. It overlooks the main stage, so you can enjoy a few pints while watching the awesome live acts perform, and if you bring your warm cans of Carlsberg to their Cool Can stations they will exchange it for brand-new cool ones.

Because cool cans are better than warm cans. This is simple stuff folks. 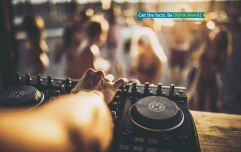 END_OF_DOCUMENT_TOKEN_TO_BE_REPLACED

There's also going to be a cool initiative where people will be able to buy a pint keep cup to reduce their single use plastic. If they return the cup after the festival, they will get their money back.

We've got two full weekend all access tickets up for grabs for one lucky reader. All you've got to do is answer the simple question below!

Carlsberg Unfiltered takes inspiration from Danish simplicity and connection with nature, and this will influence the stage too. It will be a space to chill and enjoy performance art, interviews, comedy and DJ sets.

Brought to you by Carlsberg Unfiltered


popular
Here are Ireland’s favourite takeaways, as per the National Takeaway Awards
QUIZ: Week 16 of JOE's 19 in 90 quickfire quiz is here
Met Éireann forecasts risk of sleet and possibly snow in parts of Ireland this weekend
Terry Jones from Monty Python has died, aged 77
Maria Bailey has announced she will not run in the general election
New documentary series examines three brutal murders and a mysterious satanic cult
Haunting of Hill House star says the sequel will be more intense than Season 1
You may also like
23 hours ago
New year, new you? Thrive Festival 2020 is the answer to all of your fitness needs
1 day ago
COMPETITION: Win two nights B&B in the Knightsbrook Hotel for two people
4 days ago
QUIZ: How well do you know Will Smith's movie career?
6 days ago
COMPETITION: Win a VIP table for four to see Sharon Shannon live in Dublin
1 week ago
COMPETITION: Win free tickets to Titanic Belfast for yourself and a mate
1 week ago
QUIZ: How well do you know the first two Bad Boys movies?
Next Page