If you've ever enjoyed the intense power of RATM, you need to check this out.

It's tough out there in 2019 for Rage Against the Machine fans.

Despite the fact that the band enjoyed a successful reunion over a decade ago - hey, who remembers Oxegen 2008? - and that all members are still active in music to some degree, there are still no signs of new material from the legendary agitators.

Throw in the current state of a world that just keeps on burning and you'd imagine that inspiration shouldn't be in short supply.

And yet, it seems that frontman Zack de la Rocha just isn't interested.

He's worked with Run The Jewels on one of their best songs, released the odd gem of his own, put out just one EP as part of the One Day as a Lion project and supposedly has an entire solo album produced by Trent Reznor of Nine Inch Nails fame that's locked away in a vault somewhere, Prince-style.

What we're trying to get at here is that we need you, Zack. Much like we could really use one last ferocious, take-no-prisoners RATM album in our lives.

Seriously, the last proper non-cover-based studio album from the LA outfit was all the way back in 1999. It's time, lads.

But yeah, it's probably never going to happen.

Now, we're not saying that anyone could ever replace Zack de la Rocha at the tip of the spear, but if we ever were to imagine such a scenario, we think they could do a lot worse than Denzel Curry. 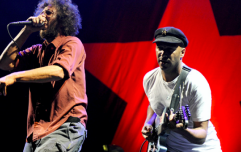 Rage Against the Machine announce they will play Electric Picnic 2020

END_OF_DOCUMENT_TOKEN_TO_BE_REPLACED

The Florida rapper has entered in a truly incendiary cover of 'Bulls on Parade' for Australian radio station Triple J's excellent 'Like A Version' series.

And quite honestly? It's one of the best covers we've ever seen or heard, anywhere.

This is exceptional stuff from Curry and his band, the kind of brilliant reworking that honours the original and makes a convincing argument for its own status as a standalone great.

Again, we know that replacing ZDLR would be a crime, but if anyone could step in, it just might be Denzel Curry.

Check him and the song out in all of their stunning glory below.


popular
Sinn Féin announce a series of public rallies to take place in five counties
Met Éireann issue rainfall warning for 19 counties, with a side of snow
How well do you remember these classic PlayStation 2 games?
QUIZ: How many of these Derry Girls characters can you name?
QUIZ: Can you name the Sega Mega Drive game from the screenshot?
The JOE Friday Pub Quiz: Week 179
Brendan Gleeson's upcoming performance as Donald Trump is 'scary' and 'too close for comfort'
You may also like
3 months ago
Rage Against The Machine tipped to play even more gigs on their 2020 reunion tour
3 months ago
REWIND: Rage Against The Machine's Battle of Los Angeles is just as powerful 20 years on
6 months ago
WATCH: 1,000 musicians all playing 'Killing In the Name Of' is simply glorious
1 year ago
It's the 4th of July so here's the 10 best songs that capture the American spirit
3 years ago
WATCH: Dave Grohl joins Prophets of Rage on stage to cover a punk-rock classic
3 years ago
Rage Against The Machine appear to be hinting at a comeback...
Next Page