"I fell in love with that idea of someone who feels so compelled to just express themselves in that way."

If you needed any further proof that Garth Brooks has had a major impact on Irish culture - who could ever forget the five-night Croke Park residency that never was, eh? - look no further than the rise of Dermot Kennedy.

Granted, the 27-year-old doesn't plough a similar honky-tonk furrow, nor does he sport a Stetson, but his earliest musical memories are forever intwined with the legendary Oklahoman. 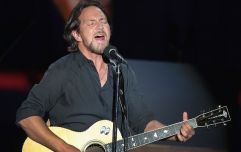 END_OF_DOCUMENT_TOKEN_TO_BE_REPLACED

But while Kennedy first became aware of music via listening to Brooks in the car, it was a more homegrown offering that really kick-started him towards his own journey.

"The most solid thing in my mind of when I started to kind of get hooked on an artist or a certain genre and then know that that's what I wanted to be was; there was a gig that The Frames did, and it was on telly," he told Dion Fanning on this week's episode of Ireland Unfiltered.

"I don't even know that I'd ever heard of them. I wasn't even into music yet, I was super young, but I saw them on TV and I was just hooked with how Glen Hansard delivered songs. I was just so into it and from there that became my obsession and it's with me to this day.

"Then I got hooked on David Gray and Ray LaMontagne and then from that started listening to hip-hop. Even these days you look at somebody like Meek Mill or Stormzy - just that kind of honesty and the power of the story they're telling, it goes from genre to genre for me and it exists in so many different forms.

You can watch the full interview with Dermot below.

The Big Reviewski || JOE · The Big Reviewski with Y: The Last Man, that Malignant ending & a secret streaming service
popular
The JOE Friday Pub Quiz: Week 261
"Variable speed limits" to be introduced on the M50 in the coming weeks
One of the better Liam Neeson action romps is among the movies on TV tonight
Michael D Higgins cites "political statement" in decision to turn down Armagh ceremony invitation
You season 3 trailer has just dropped and it looks like the wildest series yet
Miriam O'Callaghan had no patience for Stephen Donnelly's "gibberish" on Prime Time
"Wise man of today" Michael D Higgins praised by Pope Francis
You may also like
2 years ago
Glen Hansard announces Vicar Street gigs for 2019
2 years ago
WATCH: Busker singing 'Falling Slowly' by Glen Hansard in Dublin city gets tipped by Glen Hansard
2 years ago
Glen Hansard was extremely critical of the Government and their handling of the homeless crisis
3 years ago
WATCH: Hozier and Glen Hansard outdo themselves during this year's Christmas busk
4 years ago
Pearl Jam front-man Eddie Vedder has announced Dublin and Cork gigs with support by Glen Hansard
4 years ago
VIDEO: Glen Hansard plays gorgeous version of Ashes to Ashes to fans outside David Bowie’s New York apartment
Next Page