Drake is the perfect icon for the Spotify generation, and that's not a good thing

Drake is the most popular artist in the world. Why, though?

Not just one of the many, many songs found on Scorpion, the much-vaunted new album from Drake, but the state of mind with which one approaches this latest, most angst-ridden of projects.

Heart, as ever, on sleeve, Aubrey Drake Graham has set up a passive-aggressive, navel-gazing empire over the past decade, and he intends to cling tightly to it.

Scorpion marks the third full-length effort in as many years from the 31-year-old Canadian, following 2016's Views and 2017's 'playlist' More Life.

Combine all three and the running time is close to four-and-a-half hours.

In many ways the personification of the shrug emoji of the rap, hip-hop and R&B game (Scorpion resolutely caters to all) Drake has a strangely generic quality that feels in direct contradiction with his staggering popularity.

To put it plainly; the guy is a megastar, one that routinely breaks streaming and sales records to stand tall atop a mountain that only a few gilded names in the entertainment world can dare approach.

A reminder of this came in the hours following Scorpion's release last weekend, when Spotify blanketed the curated playlists on their app in Drake's image in a move not dissimilar to an oversaturation-by-design marketing campaign for Deadpool 2. 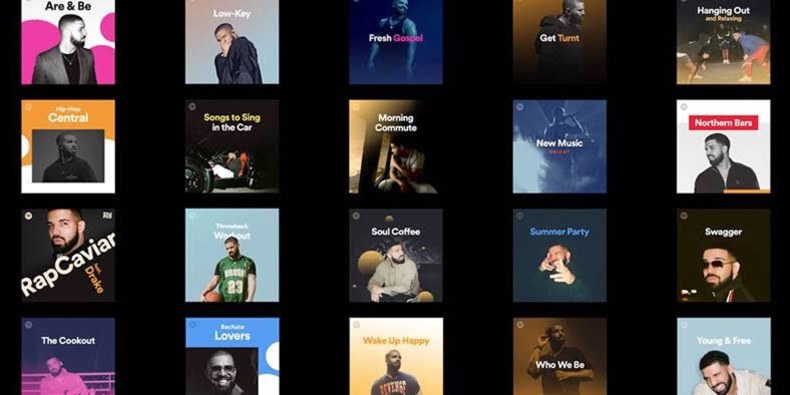 Success breeds this sort of thing, and in 2018, it's important to capitalise and pounce on increasingly short attention spans while you still have them in your grasp.

END_OF_DOCUMENT_TOKEN_TO_BE_REPLACED

While not quite the outright disaster that U2 found themselves in upon 'gifting' everyone with access to iTunes a free copy of their Songs of Innocence album in 2014, the above is... not a good look.

The initial damage is minimal as Spotify prepare to count the ultimately minor cost as users demand, and may well receive, compensation for being bombarded with too much Drake.

Too much Drake. It would be funny if it wasn't so sad, and so crushingly, life-sappingly dull.

Credibility takes a hit here, if you care about that sort of thing. Legacy, too. You wonder if such concerns are on his radar, or if committed content creation is more important than a valid reason for its existence.

But who is Drake, really? More to the point, what is he?

It's worth noting that beneath this singular, hugely powerful entity lies a human being.

We know he has emotions, for he tells us over and over and over again. And yet, it's troublingly easy to dismiss him, to pour scorn, to revel in his apparent misery.

In truth, Drake isn't likeable, and it's difficult to fully distinguish why. It just simply... is.

Unfair? Definitely. And it's not as if the man himself doesn't know as much. The 'Editors Notes' section of Scorpion's entry on Apple Music reads: 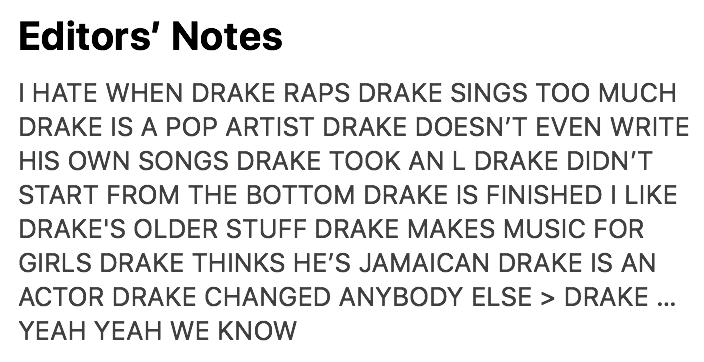 END_OF_DOCUMENT_TOKEN_TO_BE_REPLACED

Even if Kanye West beat him to this exact sentiment and delivery by two years, this is still fair enough.

Frankly, it's refreshing for a major artist to cut the bullshit and offer a candid look at what's really going on, how they honestly feel about their conflicted place in the world.

The stage is set for Scorpion to be an incredible, ferocious state of address for arguably the most popular, most influential musician of right now. He's pissed off, and he's going to let us hear it.

And then it's just another Drake album.

"My Mount Rushmore is me with four different expressions," he exclaims some 22 seconds into this 89-minute epic.

A fairly laughable statement for a couple of reasons, not least of which being the puzzling image of Drake being able to express four separate individual expressions.

The line does at least offer some approximation of brevity, however, in that it acts as a quick capsule microcosm of his chief interest and subject matter.

Drake's lyrics, generally, are blunt and highly juvenile. His depiction of women is almost wholesale vapid. They are property to him, and little more.

Recent attempts to vaguely try and catch up with a zeitgeist moment can't help but feel terrifically hollow, as seen in the promo for 'Nice For What' and its all-star cast of famous and influential women: 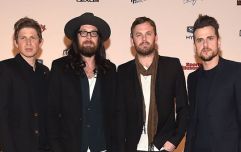 END_OF_DOCUMENT_TOKEN_TO_BE_REPLACED

Nice try, but not quite. Banger, though.

Drake clearly has charisma, but it's almost always unfurled in a signature subdued manner that causes the bulk of his work - and there is just so much work - to blur into one vast, formless maze.

This arguably works just fine as a reflection of the bitesize playlist culture we find ourselves in, and this writer is just as guilty as anybody else on that score.

That said, you want for albums to still matter, and they do, despite hundreds of think-pieces straining to tell you otherwise.

Drake doesn't seem to care about the art of the album, the impact it can have, the focus that it requires.

Scorpion is not one, but two albums. One supposedly geared towards rap, one towards smooth R&B.

It excels at neither, and tells us nothing new. It feigns at answering challenges and lazily approaches the expected 'heavy lies the crown' narrative, but you've heard it already.

How can something the length of a feature film say so little? It's not as if the guy was short of material, given his latest jaw-dropping skirmish with Pusha T.

If you happened to have missed out on that particular beef, it's been years in the making.

The order of recent events goes something like this:

Days later, Drake hits back with diss track 'Duppy Freestyle', which goes over well enough and Drake is hailed for his quick and sharp retort, which included a six-figure invoice to Push and Kanye's G.O.O.D. Music imprint for "promotional assistance and career reviving".

And then, this happens:

Boasting a vicious streak not seen since the glory days of Nas and JAY-Z, 'The Story of Adidon' is a two-pronged assault and a clear victory for Pusha T.

First, you have the artwork; a real photograph of Drake in blackface.

Second, the lyrics which expose Drake's secret child who he has apparently been neglecting.

The story goes that Drake was intending to reveal his son as part of the rollout of an Adidas campaign, which, well, yeah, modern media and pop culture sure is grand, eh?

Pusha T stopped that from happening, and it was pretty much unanimous that Drake had been utterly destroyed here. What would he do next? What could he do next? How do you come back from this?

In the end... he did nothing, save for posting a statement via Instagram story offering context for the blackface photoshoot - claiming that it was done in the name of important social satire.

“The photos represented how African Americans were once wrongfully portrayed in entertainment," Drake wrote.

"This was to highlight and raise our frustrations with not always getting a fair chance in the industry and to make a point that the struggle for black actors had not changed much.”

As for the red-hot response the world was waiting for? Nope. Sorry. Move along.

Pusha, for his part, welcomed any, er, push-back, promising a "surgical summer" of truth, with more to come. Kanye West and industry figure J Prince intervened, drawing a line in the sand.

Still, we expected Scorpion to have a requisite sting in the tail.

Instead, Pusha's screed goes unacknowledged save for a couple of minor references, the most eyebrow-raising being, "I wasn't hiding my kid from the world, I was hiding the world from my kid" on 'Emotionless'.

A cute line, but a cop out, one that doesn't sit well with the classic, 'Oh I could have kicked the shit out of him, but I'm choosing to be the bigger man' narrative. What a mess.

His latest identikit barrage isn't an exceptionally dreadful piece of work. Scorpion doesn't really deserve aggressive scorn, largely because it doesn't inspire much in the way of any emotion.

But on this day and in this age, for an artist like Drake, the supposedly sensitive hybrid of genres and feelings, none of that matters. Commercial and corporate triumph over craft and care.

Drake simply exists. He's there. Click him. Enter the void.


popular
HSE issues updated list of 'at-risk groups' for Covid-19
QUIZ: Can you pass the Leaving Cert?
QUIZ: Which Tiger King character are you?
QUIZ: How many of these Recess characters can you name?
Here's Week 26 of JOE's 19 in 90 quickfire quiz
Here are the 8 best movies on TV this Thursday
The 50 most iconic songs of all time* have been revealed
You may also like
1 month ago
Artists like Dave and Stormzy are leaving a legacy that no other modern artist can compare to
1 month ago
Foo Fighters are touring this summer and an Irish gig is looking very likely
1 month ago
Dublin venue to host a belting evening of non-stop Bruce Springsteen tunes this month
1 month ago
ABBA are hoping to release new music later this year
2 months ago
Gang of Four’s Andy Gill has died aged 64
1 month ago
Christmas FM is returning as Kissmas FM for one week only
Next Page