The Dublin singer "hasn't stopped shaking" since the song featured in the Love Island final.

RuthAnne's song 'The Vow' has re-entered the Irish iTunes Chart at #1, following its appearance on the final of Love Island earlier this week.

The song was played in full on the show, which had an audience of over 650,000 people in Ireland, according to reports. 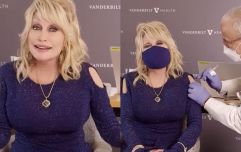 END_OF_DOCUMENT_TOKEN_TO_BE_REPLACED

Not only that, it is also in the Top #40 on the UK iTunes Chart and has been searched on Shazam over 12,000 times.

It also now has over a million streams on Spotify.

Speaking about the news, RuthAnne said "I cannot believe that I have hit #1 in the Irish iTunes chart.

"I haven't stopped shaking since I heard the song on Love Island on Monday night. It means so much to me as an Irish female artist.

"We have so much talent in Ireland and I am just over the moon to have achieved the #1 spot and I hope now that even more of my fellow Irish girls will get the same opportunity."

The ballad played at an emotional moment in the show, as the Islanders all came together for the Love Island Summer Ball.

Between this and Limerick man Greg O'Shea winning a tidy £25,000 for himself, Love Island really has done wonders for this country.

House of Rugby Ireland · Ireland's feel-good win, Casey's initiation song, scrapping Sexton and Scott Williams interview
popular
Eoghan McDermott to leave RTÉ after six years (Report)
QUIZ: Can you answer all the £1 million questions from Who Wants to be a Millionaire?
€17,500 worth of cocaine found at street party in Limerick
Sony are giving away a free game to all PS4 and PS5 owners
One man has been charged following Limerick street party, 50 FPNs issued
WATCH: Michael B. Jordan leads Jack Ryan spin-off Without Remorse
One of the most fertile men in Ireland is a guest on tonight's Claire Byrne Live
You may also like
1 month ago
Yewande Biala releases statement discussing racism on Love Island
1 month ago
Former Love Island star Zara Holland charged in Barbados for breaching Covid-19 rules
9 months ago
Love Island cancels 2020 series
11 months ago
Love Island may not be returning this June due to coronavirus
1 year ago
ITV is looking for applicants for this summer's Love Island
1 year ago
Laura Whitmore hits out at paparazzi photographing her following Caroline Flack's death
Next Page