And the crowd goes... mild?

9.47pm on a Saturday night in Dublin 8 and the ground beneath my feet is rumbling.

4.8 kilometres away, Ed Sheeran is blaring out 'Overpass Graffiti', the colliding mix of melody, reverb and thumping bass shooting across the city like the sky-scraping blue laser beam that announces the final act of about 10 Marvel movies.

END_OF_DOCUMENT_TOKEN_TO_BE_REPLACED

Sheeran doesn't want you to think him a superhero - or villain - though. He's far too polite and plain for all of that razzmatazz.

24 hours later, this writer finds himself perched only a handful of feet away this time, Massive Attack's 'Protection' stalking ghost-like around the arena, present for a second-night Croke Park appointment that raised more than a few eyebrows in the days leading up to it.

Whispers that night two was in trouble on the sales front abounded, while it only took a few seconds on Ticketmaster to register scores of available space. Ultimately, our Sunday night out turns out to be less Taylor Swift 2018 fiasco and more a decent Manchester City game at the Etihad Stadium.

Moments before the man himself is due onstage, a countdown clock lights up the giant circular video wall that stands smack-bang in the middle of Croker. Sheeran in the round, like a classic Shakespeare play.

With four minutes to go, a Mexican Wave sweeps across the concourse. But wait, it's all a misdirect as all of a sudden there's only 10 seconds to go and there he is, all 31 years of the man, the past decade of pop chart dominance made flesh. 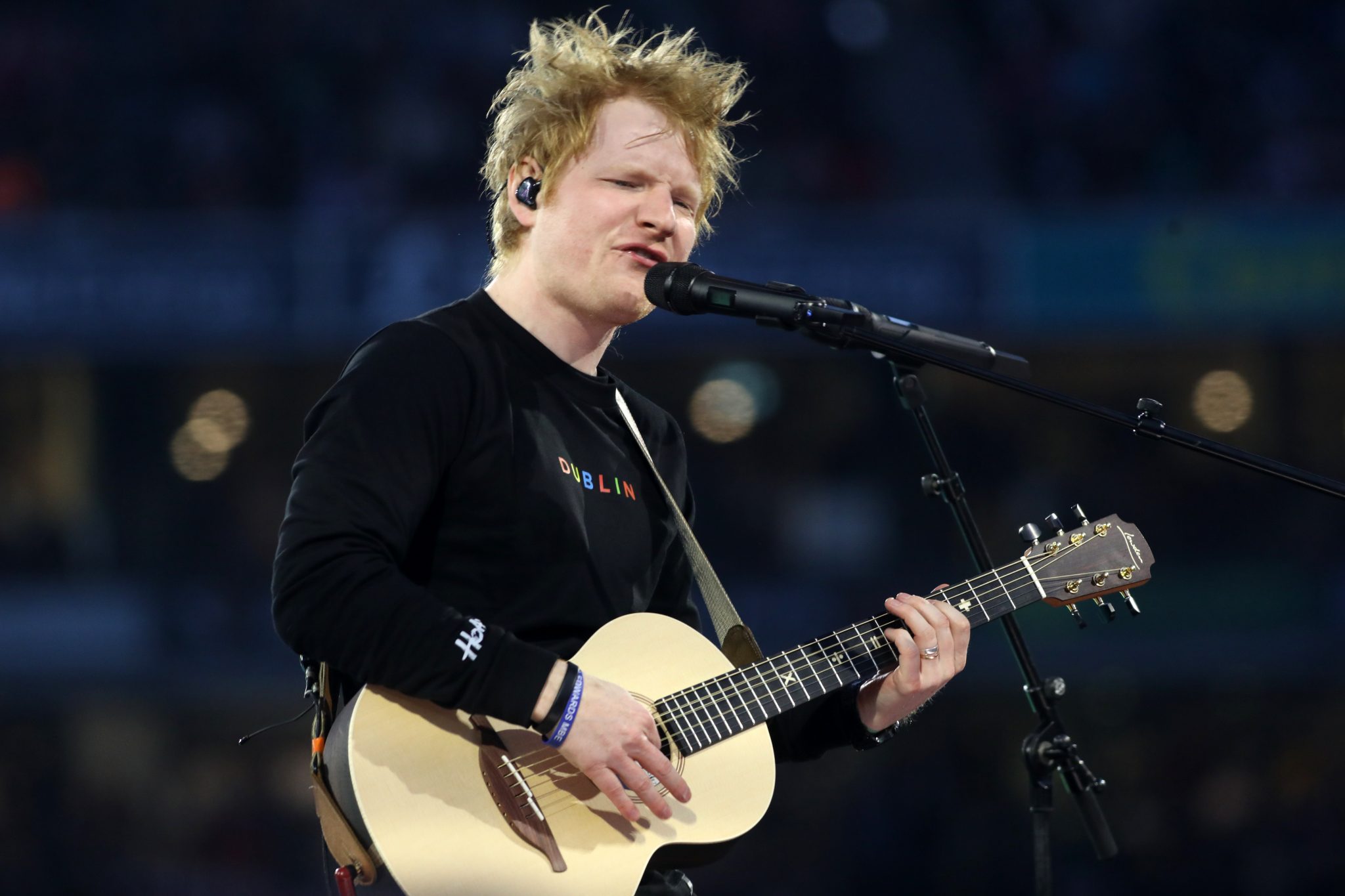 END_OF_DOCUMENT_TOKEN_TO_BE_REPLACED

'Tides', the subtext-free opener from last year's 'Equals' album – "I have grown up, I am a father now" booms the initial dispatch – kicks things off, some affable fireworks for company, occasional Metallica-esque bursts of flame, not to mention a clutch of beyond gaudy video screens in the shape of giant guitar plectrums. Because he's 4 REAL, you see.

END_OF_DOCUMENT_TOKEN_TO_BE_REPLACED

There's also a strange accompanying element for the first few tracks and another couple later – additional musicians in the form of a drummer and a keyboard player. Sheeran's long-established stock-in-trade has been that he's a plucky everyman who does it all himself, up to and including commanding the stage solo in a super-sized venue such as the home of Cumann Lúthchleas Gael.

What gives, mate? They're just here to add some brief sizzle to the mix, apparently. This tour is meant to serve as a greatest hits-style grab-bag, so it's probably fair enough that he gets to showcase the evolution of his sound, even if, well, it hasn't evolved all that much since his first amiable jabs in anger back in 2011.

Sheeran, physically circling the crowd via an airport travelator-style device that whizzes him around to face all corners of Croker as he performs, points to his five loop stations where he feeds in live sound, uses this as his real-time backing track and then destroys it immediately afterwards as if it were a Mission: Impossible dossier.

"It's quite interesting," he tells us. Indeed. It might be the most interesting thing about him, to be fair.

Sheeran's love affair with Ireland and the wider world has always felt a little bit cold, no? Sure, he dominates the singles and albums charts like he's worked out a mathematical formula – credit where it's due, in many ways he literally has – but it's hard to pinpoint big pop culture zeitgeist moments that have truly resonated over the past 11 years or so.

He generally moves the needle – however they got there tonight, they did mostly get there in the end – but you get the sense that he hasn't really been dormant long enough to warrant this particular series of shows in the Emerald Isle. Say what you will about Garth Brooks, but he's clearly a much bigger draw on these shores.

Between four Dublin shows last week – including two intimate nights out in Whelan's and Vicar Street, respectively – and six more to follow between Cork, Limerick and Belfast, it will be genuinely interesting to see just how large the appetite is for Sheeran's uniquely milquetoast canon in the weeks to come.

Iarnrod Éireann, of all our public institutions, threw some weird, unintentional – we presume, at least – shade at the man last week upon cancelling a pair of designated special services, citing a lack of demand.

Due to a lack of demand.

Brutal stuff. But we do love Ed, do we not? He's like The Late Late Show. We complain about it constantly but we want to know who's on it and we'll probably passively tune in nonetheless, right?

Maybe. Maybe not. Is this particular love affair done and dusted? Certainly not, though it really could use some spice.

In truth, even the hardcores in JOE's orbit on a cold Sunday at Croke Park don't seem all that bothered. It's telling that the loudest roars of the night are reserved for when he sidesteps 'Don't' for a run of Blackstreet's genuinely iconic 'No Diggity', performs Justin Bieber's deceptively acidic 'Love Yourself' – which he co-wrote – and cues up the risible 'Galway Girl' to a depressing Pavlovian 'get up out of your seats' response.

The hits 'hit' – even if not all of them technically belong to Sheeran – and the staging appears somewhat transcendent when night finally falls but a show of this gargantuan scale really shouldn't feel so ordinary. Nor should the bars shut down with over half an hour left to go, but we won't blame Ed for archaic licensing laws.

"Has anyone seen Sons of Anarchy?" he asks, inviting the confused stares of many a child unfamiliar with Kurt Sutter's wildly askew biker version of the Hamlet saga. This is somehow the lead-in to 'Perfect'. Don't ask, no idea.

An emotive attempt at 'The Parting Glass' invites bemusement and apathy. Later, an Ipswich Town jersey is donned, complete with Sheeran's tour as the sponsor, a clear callback to a Succession season two sub-plot.

I keep coming back to the guitar plec video screens, the sad strange hubris of it, the 'not even U2 or Bon Jovi would dare' tightness in my throat, the bizarre image of Edward Christopher Sheeran encased forever in the bland digital prison of his own construction - an NFT gone rogue, yet one unlikely to truly bother anyone.

At one point, the people behind me fondly reminisce about a Lisa Stansfield gig. I didn't catch the specifics but it sounded like a nice night out. Speaking of that sentiment, another voice rises up, this time centring on tonight's hard-grafting big-screen busker main attraction.

Ah yeah. Good on him.

popular
Amazon Prime Video has just added 21 big movies to its library
Here is a list of every Bank Holiday in Ireland in 2023
One of the best crime thrillers ever is among the movies on TV tonight
The 50 most iconic songs of all time* have been revealed
Nicola Bulley's phone found by the river 'could be a decoy', diving expert suggests
5 years ago, Hollywood took a massive gamble on a huge sequel... and lost big time
Netflix has just added one of the best sci-fi movies of recent years
You may also like
3 days ago
Conor McGregor offers solution to Croke Park fiasco that should suit all parties
5 days ago
Katie Taylor's homecoming fight to take place at the 3Arena due to Croke Park costs
1 week ago
Katie Taylor's rematch with Amanda Serrano 'highly unlikely' to take place at Croke Park
5 months ago
Want to help name the bridge over Dublin's famous Royal Canal? Now's your chance
1 year ago
Croke Park residents group say five Garth concerts is "unacceptable"
1 year ago
CONFIRMED: Five Garth Brooks gigs at Croke Park announced for next year
Next Page